The Artist is a French-Belgian co-production from director Michel Hazanavicius, best known for the OSS 117 spy spoof films. With The Artist, Hazanavicius delivers what looks like a potential international, crowd-pleasing hit in the form of a black and white silent comedy drama.

George Valentin (Jean Dujardin) is a silent movie star in 1927. Not unlike Douglas Fairbanks, he is suave and acrobatic but also vain. We first meet him at the premiere of his new film “A Russian Affair”, a spy thriller, which already looks like the latest in a string of hits. Outside, he bumps into Peppy Miller (Bérénice Bejo), a wannabe actress, who finds herself at the wrong end of the velvet rope. The photographers snap several photos of Valentin and Peppy together, prompting the next day’s Variety to proclaim “Who’s That Girl?”
On the strength of her new publicity and with Valentin’s support, Peppy gets a bit part on Valentin’s new film “A German Affair”, where a passionate though short-lived romance blossoms. Later, as Peppy’s star rises, Valentin’s career hits a number of problems, not least of which is the coming of sound to Hollywood, which will marks the death of silent cinema.
The Artist is, in many ways, a pleasant surprise, not least that, in the modern climate of digital photography, widescreen and unrewarding 3D, a black and white silent filmed in the Academy ratio can still find an appreciative audience. The hopes that the success in the film will spark a new interest in the silent cinema are, however, too optimistic.

The Artist has many problems and many, it is sad to say, comes from its format. Though it can be intermittently funny, inventive and moving, the story of a rising female star and her romance with a self-obsessed, older star whose career is in decline makes the film essentially just another version of A Star Is Born. Though there is nothing particularly wrong about this, it does result in the film having a troubling narrative. A lot of the running time is spent with a wallowing Valentin, desperate to get back to into the limelight. Far from the great Janet Gaynor and Judy Garland versions of A Star Is Born, the film comes to resemble Charlie Chaplin’s almost insufferable, self-pitying Limelight. While these versions of A Star Is Born relied on great performances and a great script to get through its more unsympathetic parts, The Artist has little to sustain itself.
Admittedly, the film does have some great moments, though these moments are almost all found within the first and last ten minutes. Here, the film manages to be funny and moving, but also surprisingly inventive, which so many silent films were. It is entirely evident that writer-director Michel Hazanavicius has a genuine love for the silent cinema. The problem is that he possesses only the wish, or capability, to quote and celebrate. He seems to have no real wish to make a proper silent film. There is none of the stunts, filmmaking ingenuity and drama of a great Buster Keaton, none of the social value and melancholy of Chaplin and none of the pacing and excitement of Fritz Lang. In the end, The Artist comes to feel like a mere gimmick – something that’s fun in small doses or, even, something that is funnier as an idea rather than as a feature length film. As a result, The Artist mirrors the old techniques of the silent cinema and makes a few jokes at the expense of their histrionics, but it does not manage to replicate the charm of the silents. Though it has its moments, there is nothing of the ingenuity and genius of, say, the moment when an upset Keaton sits on the coupling rod of a moving train. 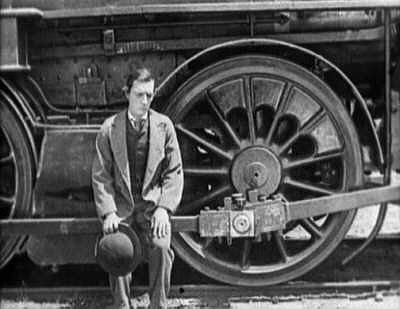 What’s left is an extended pastiche, not just of silent cinema but also of classical Hollywood cinema in general. As a result, we are treated to excerpts from Bernard Hermann’s score for Alfred Hitchcock’s Vertigo, the recreation of some famous scenes from Citizen Kane as well as references to Sunset Boulevard, Fairbanks, Murnau, Asta the dog and the films of Fred Astaire and Ginger Rogers. The film ends up becomes one of Quentin Tarantino’s tired genre rehashes, full of name checking but largely devoid of the wit or charm that the originals possessed. To watch The Artist can, at times, merely make you wish you were watching Sunrise, The Cameraman or The Circus.
However, it may be a mark of the film’s better moments that it feels somewhat rule to criticize the film so completely. The film is not without its little joys, such as when Valentin’s dog tries to alert an embarrassed and disbelieving policeman in a moment of crisis. Similarly, Hazanavicius reveals the ability to direct an Astaire-Rogers dance number, something that all the current dancing-based reality TV series prove completely unable to do. The supporting characters are all fine with James Cromwell and John Goodman very good playing it up in the old acting styles.

The main problem with The Artist is the fact that the main aim of the project seems to have been to make a silent film, rather than to tell a story or come up with some inventive formal stylistics that may be best served in a silent film. Ultimately, the film itself is not well served by being a silent film. In fact, it does not even look like a silent. Aside from that, it is also overlong. At one hundred minutes, it is an over-stretched gimmick that would have been better served in a half an hour. The story itself is clichéd and rather difficult to get swept up in and the frequent references to other films can get rather irritating. Not without its joys and not entirely a failure, The Artist remains a missed opportunity. Though a rise in interest in silent cinema could only be a good thing, it is hard to believe that The Artist will be the film that sparks it.
Posted by Matthew McKernan at 15:45