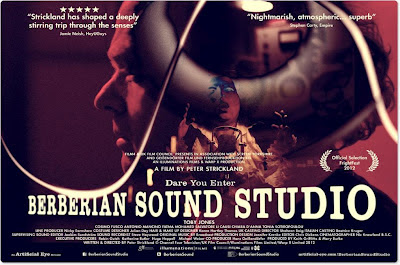 Berberian Sound Studio is a tribute to the now sadly outdated sound equipment of the pre-digital age. Not unlike Coppola’s brilliant The Conversation, the film practically fetishises sound technology. It is also a tribute to the Italian giallo, particularly the soundtracks of that horror subgenre.

Toby Jones plays Gilderoy, an English sound engineer, who has taken an assignment on “The Equestrian Vortex”, the new horror film (though don’t call it that) by Giancarlo Santini (Antonio Mancino). Initially thinking that the film had more to do with horses than witches and torture, Gilderoy is at first shocked and then fascinated by the film that he watches over and over again on the screen. He designs the soundtrack for the film, often using food to create the sounds that are to accompany the crushing violence on screen. The more he watches the film, the more disturbed he becomes.

Berberian Sound Studio is, essentially, an arthouse horror film, not unlike Haneke’s Funny Games and its superfluous remake and Almodóvar’s The Skin I Live In, a deeply troubled genre, which is often as fascinated and intrigued by the violent imagery it shows as much as it is critical of it. These films are all too high-minded and reserved to be any fun and too conflicted and contradictory to be of any intellectual merit, and Berberian Sound Studio fits alongside them perfectly.

The film is not without its little joys, though these are all contained within the film’s first twenty minutes. Afterwards, these same jokes or ideas or gimmicks, depending on what you think of them, are repeated endlessly for the rest of the film, which gets incredibly tiresome. Like The Artist, it is the perfect short film and one of the most over-stretched feature films in recent memory.

The film plays around with sound design and sound bridges to a great degree as well as lovingly showing a projector at work and the sound equipment recording and altering sound. It is fascinated with the work, or art, of the foley artist. One clever little idea in which extreme close-ups of the food used to recreate the sounds of stabbings and human bodies falling from great heights come to resemble human viscera neatly reveals what the film is all about. However, all of this gets very tiresome and it becomes horridly clear that, beyond this, the film has little of interest to offer.

We never see a single frame of “The Equestrian Vortex”, except for its highly comic title sequence, a great recreation of Italian horror cinema’s more flamboyant title sequences, but Berberian Sound Studio is nonetheless fascinated by its film-within-a-film. Writer-director Peter Strickland (Katalin Varga) might have some moral or ethical reason for not showing the violence onscreen, but his resolve is questionable at best, since he ratchets up the sound of the violence to such a degree that Berberian Sound Studio is ultimately as bloodthirsty as any recent gory horror film without showing a single violent image. The film is just as obsessed and fascinated by violence than any exploitation horror film, yet it still claims a moral high ground for not showing any. In a reference to a typical giallo trademark, the projectionist is never seen except for his black-gloved hands, as if his weapon is the film projector, or the film itself. Like Haneke and Almodóvar in their own arthouse horror work, Strickland may be squeamish, critical, even concerned but he is just as tainted as the Tom Sixs and Rob Zombies, and just about as dull.

The film is made slightly watchable by Toby Jones’ great performance (if you don't know Toby Jones, look back at Creation in which he almost steals the film or, more recently, in Tinker Tailor Soldier Spy, in which he was criminally underused), although it is entirely subservient to Strickland’s interest in the more technical aspect of the film. There is little attention paid to the development of his character and the character often fluctuates to fit whatever preoccupation Strickland has for the scene. Yet Toby Jones does manage to wrangle a few moments to shine out of the morass, often brilliantly suggesting a deep vulnerability beneath a perfect stillness. With Jones’ performance very little says an awful lot and it might often be the only comprehensible thing in this unfocused and boringly nostalgic film.

As a tribute to sound and giallo and all that, the film is horribly meaningless, with less depth than a Tarantino genre-mixing hack job. Berberian Sound Studio has nothing interesting to say about anything and it says it loudly. That the first twenty minutes is so much fun makes the rest of the film all the more disappointing and ultimately maddening. “It’s not a horror film,” say Santini in one of the film’s funnier moments, but the sentiments are purely Strickland’s own. His film is not a horror film, but something much loftier in pretension and something much more vacuous.
Posted by Matthew McKernan at 01:13