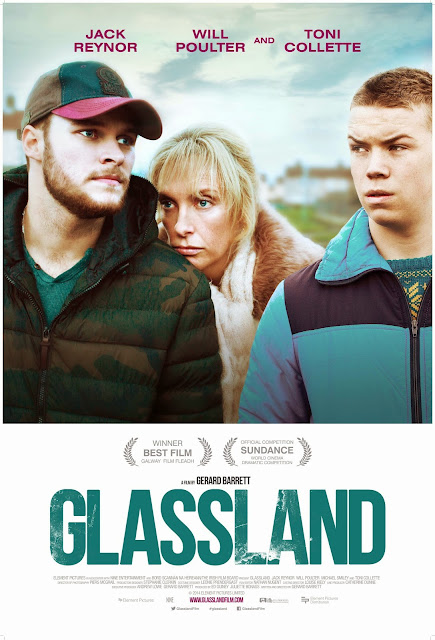 
Glassland is the new film from Gerard Barrett, whose first feature Pilgrim Hill won all sorts of praise. I have to admit that I haven’t yet seen it as cinemas in Northern Ireland are not very good at giving screens over to films from across the border. Glassland should, however, get a bigger release and is certainly worth seeing.

Jack Reynor (better remembered for the great What Richard Did than Transformers 4) plays John, a taxi driver struggling to care for his alcoholic mother Jean (Toni Collette). Exhausted by long hours at work and at home, he convinces her to get help, though help will cost money and will force John to accept shady, criminal work that he may not be able to do.

Glassland is a powerful drama about love and vulnerability and the extremes, or depths, that a person may have to go to help someone they love. John is a nice guy, but he works in human trafficking. We cannot condemn him as the film shows us his reasons, making it a powerful indictment of an indifferent state as well as a deeply moving drama of desperate people. Reynor is fantastic, rarely off screen and almost always in oppressively tight, darkly lit frames, but always deeply expressive.

The plotting is muted so that we never really think of the film as a story with a structured beginning, middle and end, more a series of causes and effects, realistic and human. Some moments are surprisingly moving, often unexpectedly, making it a deceptively simple film that may linger in your mind. The film is a little quick with its denouement but its ending is compassionate and daring, rounding of a film that is not about gangsters, sex and violence but about the people that are so often forgotten about in these kinds of stories. The film is set in a seemingly remote, barren wasteland with little warmth and few people, where alcoholism, desertion and trafficking seem both pervasive and commonplace. But this is not to say that this is a depressing film, because there are little joys in this world – it is just that they are often hard won. At first glance a minor film, Glassland nonetheless holds a powerful emotional, and political, wallop. It promises great things, important things from Reynor and Barrett and, if you’re able, you should watch.

Posted by Matthew McKernan at 19:44