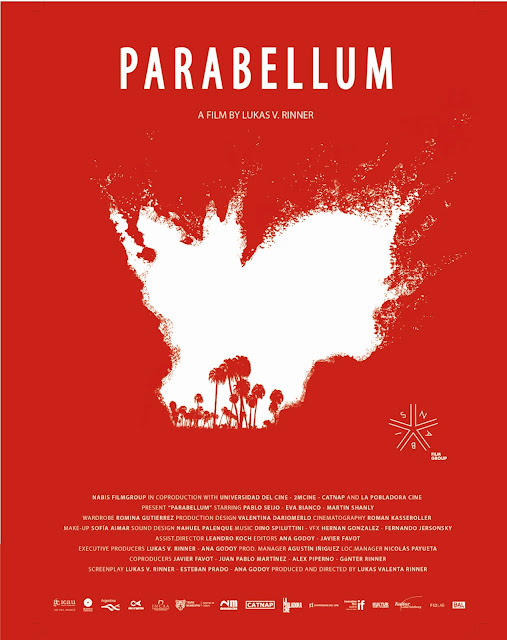 Parabellum is an Argentinian film about a group of people who join a survivalist training camp which is so distanced and austere that it is difficult to work out what exactly director and co-writer Lukas Valenta Rinner is trying to do or say with this film.

The film’s protagonist (a loose term here given that few of the characters are developed or named and mostly remain silent throughout) is Hernan, played by Pablo Seijo, who drops his cat at the pound and signs up. Once Hernan moves in, the film changes focus, exploring the daily routine in the camp before moving to a practical exercise down the river.

Parabellum, and I write this mostly without irony, is very much a festival calling card film, one that deals with a big theme (you are probably not supposed to use the term ‘high concept’) in a fashion that will invite comparison with, again, Michael Haneke. This is a film of long takes, fixed frame, slow pacing and a shrill, naturalistic sound design. It deals, in a slightly derisory way, with a dark aspect of human nature using the trappings of a genre to explore ideas and present a critique that can be both insular and archetypal.

Parabellum can also be considered with varying degrees of mirth. We could see it as a mocking commentary on the survivalist tendency of reasonably well off city dwellers. At some points, it seems as if there is a real apocalypse occurring just outside Rinner’s conservatively framed shots – an apocalypse that our ‘characters’ (or should I write ‘the stand-ins for us all’) hardly seem to notice. We could then go further and find a commentary on the sheltered nature of the well off – they play at apocalypse but are protected from a real one. We could laugh at the genial experts, training them/ us, teaching physical fitness, self-defence and weapons training, all very hands-on, keeping a pleasant, holiday camp demeanour whilst teaching some rather disturbing things. We could, except that the film is shot like an Ulrich Seidl film and by now we know that laughter is not the aim here. Instead, we really get a po-faced and rather misanthropic representation, removed from all reality and, yes, this sober exploration of the human condition is not particularly human.

Camping holidays are often bonding experiences, people do make friends and talk, not everyone in a survivalist training camp would be so introverted. In one maddening moment, the camp instructors watch our heroes setting off on their trip down the river, one standing splay-legged and the other posed against a flag, both unnaturally still for the length of time that Rinner holds the shot. People do not stand like that and certainly not for that long. Rinner had a point to make with this shot, but that means that the film’s realism was subordinated, in this case and in some others, to the film’s point – no crime, but where does that leave a film so aesthetically manipulated? Can we take any points from a film so artfully unrealistic?

Further, the fact of the real apocalypse playing out off-screen ruins the film’s point. If we are to take it as a joke about how the rich might play at apocalypse, then the fact of a real, currently unfolding end of the world destroys this idea of ‘play.’ Maybe the criticism is instead that when the time comes for society to revert to ‘survival of the fittest’ mode, the rich will remain sheltered. Hardly likely since the apocalypse appears to manifest itself in meteors – a final shot shows us the faraway city being pelted, killing, surely, some of those sheltered rich. Equally, add to this, the fact that the group of survivalists in training itself dissolves after one of their number, Juan, played by Martin Shanly, sets himself on fire, traumatized by an unexpected assault on what appears to be a real-life villa.

The film is too self-contradictary to make any recognisable points about humanity and too austere to be considered as anything other than a pointed film about humanity. In other words, the film has nothing to say and has chosen a very demanding and exploratory way of saying it. Haneke without the brain, Parabellum finishes up looking quite silly and it gets pretty dull.

Parabellum screened as part of the London Film Festival and is also currently played on MUBI.

Posted by Matthew McKernan at 20:06