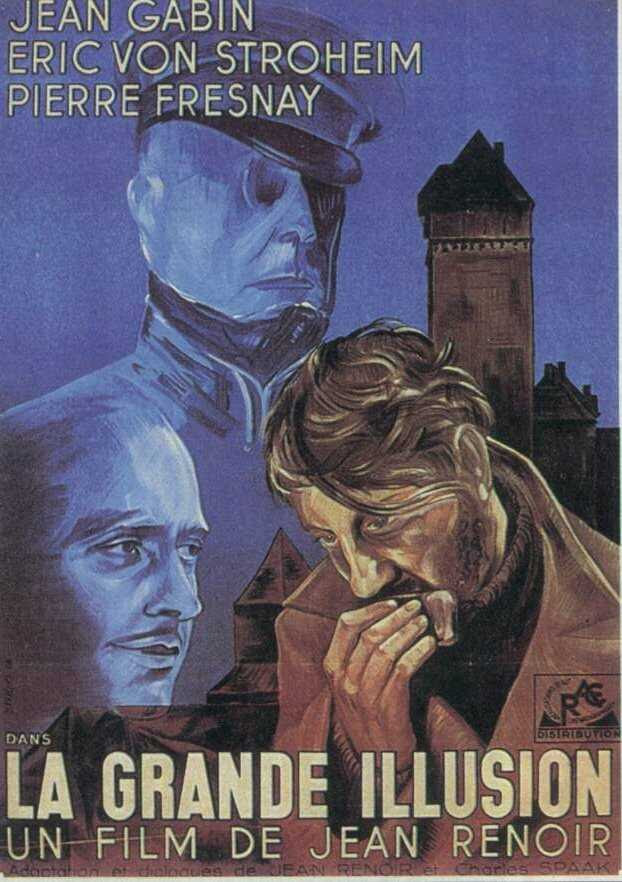 La Grande Illusion is a 1937 anti-war film from French film director Jean Renoir, set for a cinema re-release on 6th April 2012 to mark the film’s 75th anniversary. Despite being set largely inside POW camps during WWI, the film remains relevant and a worthy addition to Renoir’s interesting career, which ranges from the masterpiece La Règle du Jeu to the rather stodgy French Can-Can.

Based on stories told to Renoir by soldiers fighting in the WWI, La Grande Illusion begins with the capture of two French airmen after being shot down by Captain von Rauffenstein (Erich von Stroheim, a strange actor – and here at his most strange), an ace German pilot. The two French soldiers are working class mechanic Lieutenant Maréchal (Jean Gabin, a French star at the time) and the aristocratic Captain de Boeldieu (Pierre Fresnay). They are sent to a POW camp in Hallbach.

There they meet a range of people from different backgrounds, including Rosenthal (Marcel Dalio), a Jewish banker. Despite the fact that their treatment in the hands of the German’s is not very harsh, they elect to try to escape.


Jean Renoir’s film has always been considered one of the great anti-war statements in cinema (despite the old joke that it is somewhat invalidated by the fact that WWII began so soon after its release), but it is also a refreshingly humanist look at people during war. Though the Germans are largely the guards and the French prisoners, the film takes a multi-faceted approach, offering an array of emblematic moments to show that there is humanity on both sides. One sequence involving the distribution of food in the camp shows how everyone reacts similarly to their lot, regardless of whether they are French or German, working or upper class. Though the horrors of war are subtly apparent in the film, particularly in one haunting scene in which the French prisoners are silenced by the deafening and endless footsteps of hundreds of German soldiers, Renoir’s primary focus is on the relationships of a group of men thrown together by extraordinary circumstances. As such, the film is funny, moving and frequently surprising.

The performances are, for the most part, great. Fresnay is moving as a member of the old bourgeoisie who is well aware that his time is running out. Similarly, Stroheim, despite appearing battle-torn and trussed up in a neck brace that must have inspired the costume design of Darth Vader, is moving as a generally decent man caught in bad times. Captains de Boeldieu and von Rauffenstein find that they have more in common with each other than with their own men, making their exchanges amongst the film’s best moments. Less convincing, however, is Jean Gabin, who has always been a touch wooden. However, in the film’s final half hour – a delightfully unexpected little epilogue to a film that has already reached a satisfactory conclusion – Gabin improves remarkably, perhaps suggesting that that star of so many bleak French films (Carne’s Le Quai des Brumes and Le Jour se Leve) really just needed to cheer up.

One of the film’s major assets is the precision of Renoir’s direction. He can say a lot with only a simple pan, as when the camera shows us similarly decorated French and German canteens. Similarly, in the above-mentioned scene in which the French prisoners are cowed by the footsteps of the German forces, Renoir leaves the marching troops unseen, knowing the scene’s power comes from their powerful and doom-laden footsteps. Renoir uses his camera to tell the story and while the film is playing, there is a strong feeling that we are in the hands of someone who knows exactly what they are doing.

The exact illusion to which the title refers is left open to many interpretations, allowing the film to avoid the didacticism of similarly pointed anti-war films. However, the film’s key value is its refusal to judge anyone, whether they are French or German. While a film like Saving Private Ryan may seem to be an anti-war film due to its attention to the horrors of war, it refuses to recognise that there may be good people on both sides, allowing the audience to enjoy the violent spectacle due to its apparent sense of justice. Renoir keeps what little in the film might constitute battle scenes unseen, grim and tragic rather than rousing. Though some of his techniques might be a touch on-the-nose today, it is worth remembering that there have been a proliferation of anti-war films that have since taken its ideas and diluted them by repetition while not always presenting them with as much talent and flair as Renoir.

With great humour, precision, poignancy and performances, it critiques man’s inhumanity to man by suggesting that our greatest illusions are the boundaries that keep us fighting amongst each other. Almost destroyed by the Nazis during WWII, La Grande Illusion is a powerful and, ultimately, universal anti-war statement because of, not in spite of, its humanism.

Posted by Matthew McKernan at 15:40