ARTICLE: Beneath The Earth Film Festival 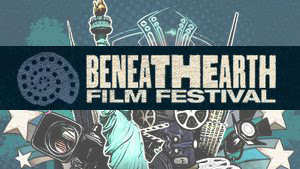 Beneath The Earth is an internet-based film festival, which specializes in films that would otherwise be overlooked. The festival is designed to give its films an audience it would not otherwise have and to give the participating filmmakers a leg-up in the industry.

The film that was awarded Best Film was Ditching School to Whistle (directed by Ien Chi), a short documentary about Ien Chi and his journey to a Whistling Convention and what went on there. It was a well-made film about a subject few would know anything about. While not the most conventional of subjects, the film does manage to convey, to a degree, what the Whistling Convention means to some of those who attend. However, the film does not go into as much depth as it could have and the conclusions that Ien Chi comes to at the end of the film are not entirely convincing. As a portrait of people’s enthusiasm for whistling, it is illuminating, but the subject matter is nevertheless rather slight and deeper meanings are a little too hard to find. Ditching School to Whistle also won the Best Story award.

The Audience Award went to Taiwanese short The Double (Yu-Tong Weng), a strange short film that reflects on trauma and isolation, dreams and awakening sexuality. The camerawork can be off-putting, with many of the shots fragmenting faces and objects without much apparent purpose. Similarly fragmented was the narrative, which refuses to reveal the full story until the end. Overall, it is a little too long and sombre, but it is commendable for its seriousness and artistry, attributes that feature in most of the seven films in the festival. The Double also won Best Soundtrack.

Refuge (David Schmudde) picked up the Best Acting and Best Editing awards. Refuge is a good short that plays around with a complex narrative and a central mystery that is not revealed until the closing moments. It deals with such themes as guilt and expiation. It overdoes the narrative jumpiness to an extent as the viewer left confused for the majority of the running time as to what the point of the film is. However, when everything becomes clear, the film reveals itself to be an interesting and assured examination of guilt. That said, the stakes could have been a little higher and I’m not sure if the God-like stranger was the best way to carry the film through to its conclusion. Overall, it is an interesting film with only a few minor flaws and very well made.

Best Cinematography went to Extranjero (Dan Lumb and Crinan Campbell), a complex short film, presumably a story about immigration. It is let down by having too many ideas packed into too short a running time – five minutes. The end result is an interesting and well-made film that is somewhere close to incomprehensible. It is rather difficult to work out if the filmmakers had a point beyond the visual and editing stylistics.

The other three films were all interesting. Jackpot! (Tony Ducret) is an odd film with a story that verges on misogyny and a host of characters that are all deeply unlikeable. As a look at our celebrity-obsessed society, as a result, it works very well. However, some scenes feel a little stilted and the camerawork can be quite leering and the rap music video editing goes some way towards robbing the film of any seriousness. It’s a nasty little film but there is nothing wrong with that if something is being said – though I’m in two minds about whether or not the filmmakers intended to say anything. That said, it was the funniest, silliest and most ironic film in an otherwise largely sombre selection.

My two personal favourites were Stay Still (David J. Kelly), a gritty urban neo-noir in which the older of two siblings is forced to do a drug run for his mother’s lover. His younger brother, who is still relatively innocent, but not necessarily for long, follows him into the night. Refreshingly, there is a moral hue to the action, which is not all shouting and violence as these things can so often be. The dilemma here is the protection of the younger brother from the world around him even as that world slowly and inexorably infects him. The performances are all very good. However, the film is let down only by a few dream-like sequences, which undercut the grim premise, offering an escape that is otherwise impossible. There is also a degree of anti-climax at the end of the film, though the film is wise not to suggest an ending in which everything is fixed.

Drowned Out (Leo Claussen and Nicholas K. Lory) is impressive for a number of reasons. First of all, it is a feature-length film – the only one in the selection - that, for the most part, sustains itself. The premise is interesting and the film develops its simple idea well, moving through a number of tones and moods without losing its overall point. The performances are all good and the writing works well. The film is essentially about the disintegration of one man’s mind and, as a result, there is a lot of interior exploration, which is done with subtlety and understanding. However, especially towards the film’s end, there is a degree of ponderousness, particularly a point of view shot of the film’s protagonist HR climbing some stairs.  Overall, the film is a good exploration of isolation and it has a number of ambiguities that would sustain a second viewing.

As a viewer, the most interesting thing about this selection of films in the Beneath The Earth film festival is that they are all completely different in terms of influences, themes and approaches. There were a broad variety of ideas and techniques and every voice was unique. As well as that, they all work very well as first-tries, the filmmakers behind them all showing promise. To watch all seven films is to feel optimistic about the future generation of filmmakers and the quality of the films they will make.

All seven films are available until the 30th of November on the Beneath The Earth website.

Posted by Matthew McKernan at 19:47