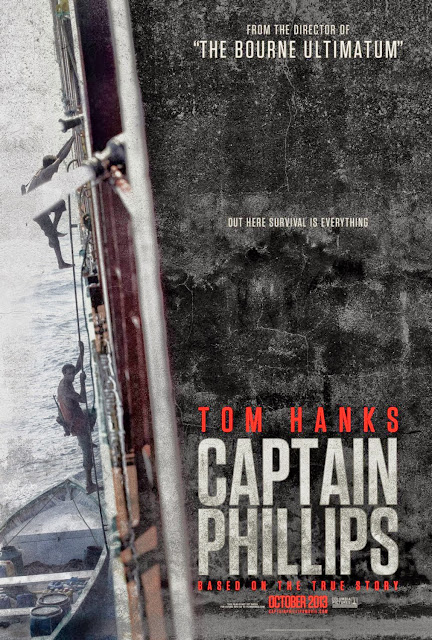 Paul Greengrass’ true life films have always been better than his fictional ones, if only because the raw immediacy and documentary-style camerawork that has become his trademark seems more significant attached to non-fiction rather than Bourne spy stories. Bloody Sunday and United 93 (and Omagh, which he produced) are important films, and all the more engrossing for impacting and commenting upon the real world – in both cases, these films are about human suffering and extreme, high pressure situations. Captain Phillips is a welcome return to non-fiction, a powerful, suspenseful thriller that is all the more riveting for having something to say about a real world problem.

Captain Phillips (Tom Hanks, in a game changing role) and his crew of twenty people are sailing around the Horn of Africa, into dangerous waters full of Somali pirates, in a huge cargo ship. On 8 April 2009, four Somali pirates boarded his ship and held the crew hostage. The film shows what happened next during the five-day ordeal.

Captain Phillips is, in some ways, an inversion of the classic underdog story. Though fraught with tension, the sequence in which Muse (Barkhad Abdi) and his fellow pirates (Barkhad Abdirahman, Faysal Ahmed and Mahat M. Ali) successfully board a ship much bigger than the little speedboat they pursued it in is hard to watch without feeling slightly impressed. Similarly, the film is not entirely concerned with Captain Phillips’ experiences alone. Where Zero Dark Thirty uses cinematic language in a rather fascist way, allowing the perspective to be limited to Americans alone, Greengrass’ is much more democratic. Early scenes are frequently mirrored, showing that both Phillips and Muse are under pressure from their bosses. As the pressure builds, we often see the tough decisions weighing on Muse as well as Phillips. In the end, the film offers sympathy to both sides of a difficult situation, increasingly drawing parallels between Phillips and Muse to suggest a wider problem that neither is responsible for.

Western overfishing and the resultant lack of opportunity in Somalia are briefly mentioned, demonstrating that Somali pirates are far from black-and-white villains and that the West, and globalisation in general, is culpable. These shades of grey are important to note, giving an ironic slant to the film’s many images of American military power. The film shows that American military might is immense, with warships, drones, helicopters and the Navy SEALS all making an appearance. What could appear as a Zero Dark Thirty-style celebration of American power, or a PR campaign to justify America’s policing of the world, is instead presented critically. The film sympathises with the plight of the pirates, showing them as just as trapped as Phillips, if not more so. By the end of the film, without giving too much away if you don’t know the outcome to the real world story, they are so overmatched that there is no way for them to escape. The American military response seems so overbearing and so one-sided that it is difficult to see them as simply peacekeepers or rescuers – indeed, their capabilities and actions are rather frightening. The film is essentially a tragic story in which the American military does not so much as save the day as bring even more pain to an already desperate victim of the West. The pirates are ultimately the underdogs in the story, but it is not a heart-warming one.

However, this is not to say that the Americans are unsympathetic – Greengrass’ cinema is not as simplistic as that. The film is called Captain Phillips after all and Hanks turns in a brilliant performance as everyman Phillips, trapped in a terrible situation and improvising as best he can. The tense showdown between him and Muse on board the MV Maersk Alabama (Phillips’ ship) is fascinating, with Phillips testing how far he can go to protect his ship and his men before the pirates start getting violent. At the end of the film, when it is all over, Greengrass slows down the pace to focus on the human suffering caused, a powerful, brilliant scene that reveals that all along Captain Phillips was an essentially humanist film beneath all the thriller screw-tightening. Like Bloody Sunday and United 93 before it, Captain Phillips is a powerful and respectful film concerned with discovering the human experience in some of the worst situations imaginable. Rather than judging, his films try to understand.

Captain Phillips is, hence, a brilliantly constructed and suspenseful thriller but also an emotionally devastating insight into a real world problem. It avoids taking sides or celebrating in the West’s power, instead showing the humanity and desperation that any black-and-white dichotomy would have to ignore. In other words, Greengrass makes thrillers in which you care about every character and in which the violent resolution is far from triumphant, only tragic, leaving behind only a detritus of human suffering on both sides. It is emotionally powerful because it does not guide us towards easy answers and happy endings, and its effect – as thriller and as a plea against simplistic readings of such crises - is extremely difficult to shrug off.

Posted by Matthew McKernan at 17:16