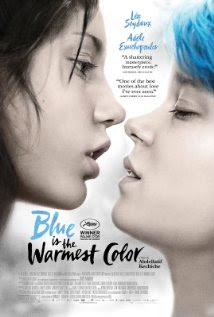 Blue is the Warmest Colour (or La Vie d’Adèle, Chapitre 1 & 2) has had a long journey from it’s premiere in this year’s Cannes Film Festival to rapturous applause to it’s cinema release, marred by a variety of controversies and a firm critical backlash. It is now probably impossible to watch the film without consciously positioning oneself on one side of the ‘male gaze lesbian sex’ debate. Other issues, such as co-writer and director Abdellatif Kechiche’s working methods seem answered by the Palme D’Or win and the applause that both Adèle Exarchopoulos and Léa Seydoux have been awarded for their performances.

The film is a nearly three hour long story, which could easily be expanded further and further like Truffaut’s Antoine Doinel series, detailing the journey of Adèle’s (Exarchopoulos) sexual awakening and maturity. Beginning with Adèle in school and ending years later in her adulthood, we see Adèle grow. Following a doomed relationship with Thomas (Jérémie Laheurte), a boy from school, Adèle begins to question her sexual identity. After briefly seeing Emma (Seydoux), an older and blue-haired Fine Arts student, on the street, Adèle comes to suspect that she may be a lesbian. Her feelings are confirmed when she begins a deeply passionate relationship with Emma, though their lives are fraught with complications.

Some of the criticisms of Blue is the Warmest Colour mention the fact that the film is loosely based on a graphic novel by Julie Maroh, a woman and a lesbian, and, hence, constitutes the removal of a lesbian voice and it’s replacement by yet another white middle-aged straight male one (see the conclusion to Sophie Mayer’s review in this month’s “Sight and Sound” magazine). In keeping with this, Blue is the Warmest Colour is a film that is not particularly about lesbianism, having more to do generally with young love. Though the film does not remove the lesbianism that is more central to the graphic novel, it does gloss over the homophobia, preferring to tell a love story in which the lesbianism is often merely incidental. In terms of story arc, Adèle and Emma’s relationship could easily be a straight one. This, coupled with some long drawn out sex scenes that many claim have a particularly male, if not leering, perspective, has led to a lot of criticism that the film is a self-gratifyingly masculine vision of female liberation. Kechiche even seems to have expected this, making pointed references to Pierre de Marivaux’s “The Life of Marianne”, a 600-page book which displays proof that a male author can convincingly present the psychology of a female character. Personally, this argument seems unhelpful, suggesting as it does that gender is a bridge that cannot be crossed – that males can’t make films about women nor women films about men, a ridiculous idea. However, that femininity is presented more often by male voices than by female voices is a worthwhile point and, here, Kechiche does not help himself by pointing towards Marivaux or, for that matter, as he does constantly in one scene for no apparent reason, G. W. Pabst’s Pandora’s Box.

It is only worth addressing these debates, which ultimately do not offer any clear solutions, because the sex scenes in Blue is the Warmest Colour are so long, so detailed and so prominent. Kechiche has claimed that the sex scenes are true to life in that they are clearly shown as only a part of Adèle and Emma’s relationship, that there are a lot more scenes set around the dinner table (for instance) so the sex scenes are not overemphasised and that sex should be presented truthfully. However, what he seems to have missed is that relationships can be truthfully represented on film but the sexual act cannot be, since it is such an off-putting thing to be a third-party, or witness, to. An audience can vicariously enjoy the aspirations of young love without feeling like a lecherous intruder and Kechiche’s attempt to represent sex just as anything else cannot help but make the audience feel as if they are intruding on something very private. This may display a sexual immaturity in cinema and in a cinema audience, something given further credence by the fact that the similarly explicit sex scenes in a film like Y Tu Mamá También are not so off-putting because the sex is not about love. If this is true that cinema cannot make sex look loving, then, it seems, like the arguments above that do not have a solution, that is just the way it is. In short, the sex scenes in Blue is the Warmest Colour are a misstep.

Forgetting the controversy, however, Blue is the Warmest Colour is a well-made drama filled with great performances, particularly Adèle Exarchopoulos, who seems to live and breathe her character. Léa Seydoux is good too, but she has a lot less to do, since she is in the role of the girlfriend in traditional cinema, one that is always underwritten and usually only one further manifestation of the film’s thematics or the protagonist’s inner landscape (see, for instance, Barbara Sugarman in Don Jon or the mothers in Like Father, Like Son). The film moves at a good pace, barely feeling its three-hour length with much momentum. As a story about a young woman maturing and gaining a form of sexual and emotional independence, it is hard to think of another film that addresses this subject with such loving attention to detail and a lack of sentimentality. If the relationship between Adèle and Emma does not say much in terms of lesbianism, it is more eloquent about a romance across class lines. Emma’s friends and relatives humour Adèle, who seems to have been exhibited for their interest and amusement. This is used to show how Adèle is fearless in carving out her own path, unperturbed by the patronising looks she gets when she says that she wants to be a schoolteacher, allowing for an ending in which she defiantly strides away from the camera into a future, one that is uncertain but absolutely her own. As a side note, the fact that the end features a potential male suitor (Salim Kechiouche) ineffectually trying to chase after her may give a lie to the criticism that Blue is the Warmest Colour is merely a male story with only the protagonist’s genders altered.

The sex scenes were a mistake, and a rather damaging one, but nonetheless Blue is the Warmest Colour is a moving portrait of the young woman maturing. It is hard to imagine a female director making a film with more insight into Adèle simply because she is a woman. It is a story well told with a great central performance and a film that was vastly over-rated at Cannes but also one that is ridiculously over-scrutinised now. Great, flawed filmmaking.

Posted by Matthew McKernan at 11:11