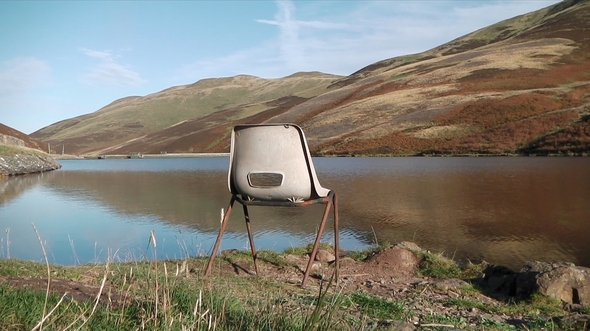 Mark Cousins continues his work on the essay film with what may play to some like an extended and more specialist episode of The Story of Film: An Odyssey, in which Cousins bares out his belief in that documentary series that the history of cinema is full of ‘omission.’ Here Be Dragons is a short history of one of the least known countries in Europe, an examination of its cinema and a rumination on the importance of cinema as a form of national memory.

The film’s own material describes it best: Filmmaker Mark Cousins goes to Albania for five days, and films what he sees. He discovers that the movie prints in the country's film archive are decaying. In investigating this, Cousins begins to encounter bigger questions about the history and memory of a place. Perhaps a country whose 20th Century, dominated by its authoritarian ruler Enver Hoxha, was so traumatic, should allow its film heritage to fade away? Perhaps a national forgetting should be welcomed? Influenced by the films of Chris Marker, Cousins' film broadens to consider the architecture of dictators and the great icon paintings of Onufri. In the past, when cartographers knew little about a country, they wrote on it Here be Dragons. Albania was, for decades, one of the least well know countries in the world. Cousins' road movie meditation takes the advice of Goethe: "If you would understand the poet, you must go to the poet's land."

Here Be Dragons then is as much about the importance of history and memory and an attempt to bring to cinema a new kind of activism and improvisational style. The film is both personal and factual. One six-minute sequence in which Cousins, furious with what he sees as the economic destruction and stagnancy and pain of Albania, writes a letter to Enver Hoxha – just as he wrote letters to Sergei Eisenstein in What Is This Film Called Love? – an angry, verbose and rather moving rant against a vicious dictator. It is personal since it is the response of a traveller who has been there for only five days (Cousins insists that the rant was written as the camera was filming) and contains several sweeping generalizations, which many who are more familiar with the history of the place may wish to dispute. For instance, Cousins states that Hoxha believed in the equality of women though his only evidence for this seems to be Hoxha’s abolition of a husband’s right to murder his new wife if she turns out not to be a virgin. One does not necessarily suggest the other and we are forced to wonder if Cousins is using facts or just assumption. Another instance of this is Cousins’ claim that it is memory that is keeping division alive in Northern Ireland and not the segregation in housing and education – amongst many other things – which precludes a closer existence and a more meaningful dialogue. Cousins’ film, as fascinating as it is as a film of the moment, a ‘present tense’ examination of the feelings of travel and the exploration of the unknown, is nevertheless possibly a naïve work, an artist’s look at political and psychological scars that does not contain the weight of proper examination.

Nevertheless, the above is ultimately a minor gripe, since the film is not intended as a work of authority – few essays films are. The greatness of F For Fake is in its freewheeling fondness for ideas and opinions, but also its trickiness. Welles seems to love the idea that his audience may not trust him as their guide. The essay film asks questions, challenges presumptions and draws parallels; it does not need to give answers. Indeed, the film is best when it is based on ideas and opinions. A train station in Rome brings to mind de Sica’s Indiscretion of an American Wife and from there to Hitchcock’s opening shot from Marnie – cinema’s past imbuing places with their own sense of history. Cousins refers to a story from Homer’s ‘The Odyssey’, in which an oar is mistaken for a winnowing fan as one walks further inland – read travel is somehow transformative. This is brilliantly referred back to when Cousins comes across George W Bush Street – our villain is their hero. He muses on the transformation of fascist and hubristic architecture, particularly a pyramid in the centre of Tirana built in tribute to Hoxha but now overgrown with wild flowers and graffiti. Elsewhere, he muses on the importance on preserving Albania’s cinematic heritage, despite the propagandist intent behind its production. Showing some clips, Cousins brilliantly repurposes some of these films, questioning them and altering them. The films are the same, but they take on new meanings. One brief moment, in which he shows what Viktor Gjika’s November 2nd used to look like compared to what it now looks like following a restoration, shows with one quick cut the phoenix-like nature of cinema, and the importance and possibilities of restoration, to the films themselves and to film history.

Here Be Dragons works best, however, as a kind of alternative The Story of Film, where Cousins examines the work of Albania’s cinematic past, finding two great filmmakers and showing clips from their work. These are Xhanfize Keko, who made Tomka and His Friends and The Newest City in the World and 27 other films between 1949 and 1984, and Viktor Stratobërdha, who made only three shorts between 1955 and 1956, including We Laugh Because We Cannot Cry, before he was imprisoned for twenty years for making a derisive joke about Hoxha during a stage show. This is where Here Be Dragons really works well, as a reminder that there are still mysteries, an Unknown out there – in cinema, in art, in literature and in the world. Where The Story of Film: An Odyssey mainly stuck to the facts and reminded you of how much you already knew of the history of film, Here Be Dragons infectiously delights in discovery.

Your own appreciation of Here Be Dragons will depend on your own fondness for Cousins’ style of cinema. Cousins can be irritating – the footage of children at play that finds a way into all of his work, close-ups of himself which are meant to be impromptu but don’t look it at all, some less successful digressions in his narration – but his films are nevertheless important and fascinating works of art. There are films about ideas, containing a breadth of reference that can be intriguing, challenging and thoroughly absorbing. For everything that doesn’t work, there will be a moment, an insight, an idea that will be beautiful, powerful or will change the way you look at and think about life, art and the world. Here Be Dragons is ultimately about exploration and its lasting effect is to make you want to read and watch and explore more.

Here Be Dragons played as part of the 14th Belfast Film Festival at the QFT on 3 April.

Posted by Matthew McKernan at 11:07