REVIEW: Going Clear: Scientology and the Prison of Belief (2015) 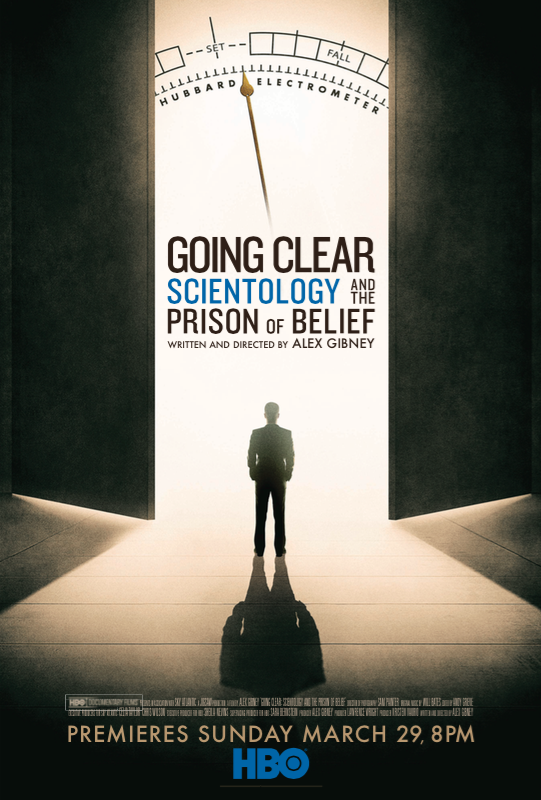 Going Clear: Scientology and the Prison of Belief is the new film from prolific documentary filmmaker Alex Gibney, based on the book by Lawrence Wright. Utilizing mainly footage and photographs from Scientologists through the years, with context added by talking heads, it looks and feels like a very traditional documentary. But is it any good?

The film begins with the history of Scientology and its creator L. Ron Hubbard, looking in particular at Hubbard’s treatment of his first wife and the battle with the IRS over tax. The film then moves onto the experiences of former Scientologists, detailing both the practices and structure of the cult, the belief systems and the stories of abuse. Each interviewee is a former Scientologist, who has left under fire from the cult, which mercilessly attacks those who break away from it.

If you don’t know much about Scientology, Going Clear is a good introduction. It explores the history of the cult, from its first manifestations in the fiction of sci-fi writer L. Ron Hubbard to the practice of ‘auditing’ etc. It also explores the cult’s battles to avoid paying tax by claiming the status of a religion, its purchase of real estate all over the world and its increasingly authoritarian and despotic leader David Miscavige. It also provides illuminating first-hand accounts of life inside the cult, which includes some thoroughly shocking accounts of abuse. Often the documentary is at its most powerful during these interviews, in which former members of the cult talk about what attracted them and what ultimately repelled them. Almost all of them speak eloquently and honestly, often with regret and shame, for what they did, excused or ignored.

These interviews are the film’s best and most focussed sequences, particularly from Sylvia Taylor and Mike Rinder, whose testimony is more powerful than any condemnation. It is elsewhere that the film ultimately falls down – I do not write ‘fall flat’ because it remains fairly riveting throughout. The rest of the film is about condemnation and, while most of the criticism is well-founded and totally deserved, some of it comes off as quite shrill. There is a whole sequence that suggests that John Travolta only remains in the cult because of blackmail, which may be likely, but is highly speculative. There is a large focus on Tom Cruise (who comes out very badly), which may be due more to his stardom than his effect on getting people into Scientology – the film paints him as a very successful and active ambassador more than it suggests that his involvement is an ego-driven fondness for their adoration of him (some footage of a birthday bash thrown for Cruise by the Scientologists is particularly cringe-worthy). Earlier, the film does its utmost to discredit founder Hubbard. Hubbard certainly does seem to be a highly discreditable person, but it does not quite tie in with the film’s purported wish to understand Scientology and Scientologists. And, of course, when the film moves onto what the Scientologist believes – that being all the stuff about thetans and volcanoes and atom bombs and an evil overlord – it goes into a full-blown animated montage, as if the beliefs themselves were not enough to convince us of the ridiculousness of the whole thing.

Ultimately this is where the problem with the film lies. At the beginning, Lawrence Wright explains that his primary motivation for exploring Scientology was to get to the bottom of what makes people believe things like this, what need does something like this fill. Gibney’s film is instead an angry, campaigning film against Scientology. It is less about the ‘prison of belief’ as the title suggests, but the prison of Scientology. Any attempt to understand is cast aside with the apocalyptic, near demonic animation and footage of auditing centres scored to Kenny Roger’s druggy “I Just Walked In To See What Condition My Condition Was In.” Instead of a sober analysis, Gibney has made a somewhat hysterical film that slings anything that it thinks might stick. In this way, the film is reminiscent of his previous film about the abuses behind faith in Mea Maxima Culpa: Silence in the House of God in which disturbing and powerful voiceover testimony was undercut by some over the top horror movie reconstructions. Gibney, here and there, does not seem to believe that personal accounts of abuse and suffering are enough to hold the interest or outrage of an audience.

It seems strange to criticize a documentary about Scientology as being ridiculous, but Gibney’s film is a little overblown. Scientology itself is clearly damaging and abusive and the accounts of all of the interviewees are eloquent on this point. Taylor’s account of the neglect of her baby while she was undergoing hard physical labour, Rinder’s account of defending Scientology against accusations of abuse whilst showing the strain of having been placed in what was effectively a prison camp, Paul Haggis’ account of his delusion about the cult and the various accounts of the disconnection between family members enforced by the cult when someone steps out of line. This is where the film makes important and effective contributions to the debate about Scientology and the practices of its leader David Miscavige, who, if nothing else, looks like a corporate dictator. Given how heavily lawyered up the cult is, this is also where the film is brave. But, problematically, Going Clear has the same taste for hysterics, the same willingness to exaggerate and to condemn. A documentary that, ironically, keeps its head clear may be a much more powerful condemnation and would provide a much more informative analysis. Surely that understanding that Wright talks about would be a much more effective means to protect people who are preyed on by cults.

Since Going Clear opts for sensationalism, it can be too readily rejected as propaganda by Miscavige and his ilk – a calmer, less speculative film would be harder to ignore. It is a riveting watch, but I doubt it will have much of an effect.

Posted by Matthew McKernan at 17:40