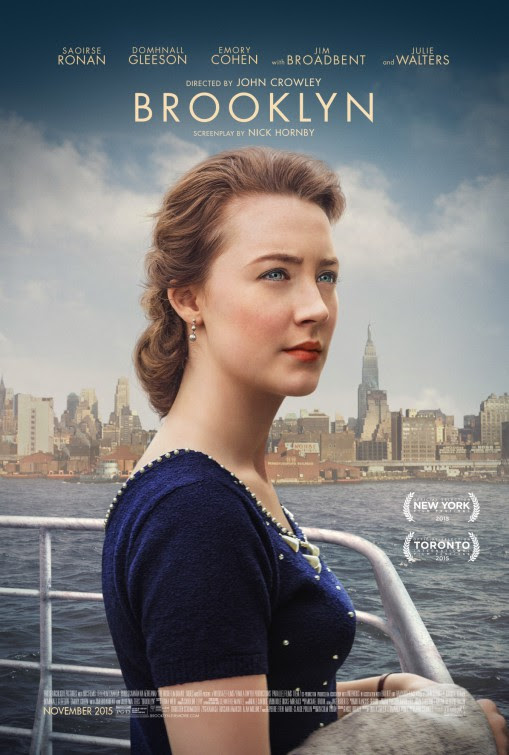 Brooklyn comes with all the bells and whistles of a major Hollywood production, but underneath its classical trappings, its score and its range of veteran character actors credited under ‘with’ and ‘and’, the film is refreshingly simple and personal.

The film begins in Enniscorthy in Wexford in 1950, Eilis Lacey (Saoirse Ronan) is a young woman in her twenties with no prospects in her home town. She has decided to go to America in an effort to find a better life. She moves to Brooklyn with the help of her sister Rose (Fiona Glascott) and friendly priest Father Flood (Jim Broadbent). Suffering initially from homesickness, Eilis finds love in an Italian-American Tony (Emory Cohen) and manages to make the big city feel like home. However, a tragedy forces her back to Ireland and she begins to question the meaning of home.

Brooklyn is an old-fashioned story and its handling here feels very much like a throwback to classical Hollywood. John Crowley’s direction is all stately, well-framed shots and slow, ruminative tracking shots – a bit of a surprise considering the jerky, nervy Intermission. Indeed, everything from the direction to the costumes, the score and the tame humour adds to this impression. And as an old-fashioned romance tearjerker, it works quite well, moving along at a decent pace, tightening the screws with only an element of manipulation. The romance between Eilis and Tony and Eilis and Irishman Jim (Domhnall Gleeson) are pleasing without being overly convincing. The romances here falter from a feeling of narrative convenience in some stretches, rather than a natural character development. However, this hurdle is overcome by the sincerity of the performances. Ronan goes for quiet and subtle throughout, which works quite well and is a pleasant surprise in a film released towards a particular season. Julie Walters and Broadbent do great work in little character roles. Cohen and Gleeson suffer a little from under-written characters, but their performances are very good.

As an adaptation, it flounders at certain stretches trying to fit in too many nuances that may work better in prose, often to the detriment of other moments that don’t get the time they deserve. The two central romances never totally seem right – both develop too quickly and inevitably to be wholly recognisable. This is not as much of a problem as it may seem, since the film’s clear focus is on Eilis herself and not on her romances. However the film falters in other ways. Late in the film, Eilis cannot seem to decide if she should remain in Ireland with Jim or go back to Brooklyn and Tony. We know that the Ireland and Jim option will not be chosen, having been given so pervasive a sense of a community conspiring to keep her there that all, even Jim, are appear suspect. But when she does decide to return to Tony, it seems as much to do with a bad run in with the evil Miss Kelly (played by Brid Brennan on slight material) than her independence or her love for Tony.

Where the film does work very well is as a tale of Irish emigration, of leaving one home and trying to make a new home of a confusing new place. This is where Ronan particularly shines – in quiet scenes, often alone, she creates a three-dimensional character who is confused and contradictory, happy and sad, nervous and excited, but always with an inner confidence and strength. Her performance holds the film together.

A poignant and traditional story of a young woman emigrating and making a home for herself, Brooklyn is a moving, funny and likable film. Though the film is a little light on development, it will stay in the mind for its heart-breaking examination of emigration, its avoidance of ‘big’ scenes and a great central performance. It’s also quite nice to hear a bit of Gaeilge in such a wide release.

Posted by Matthew McKernan at 11:20