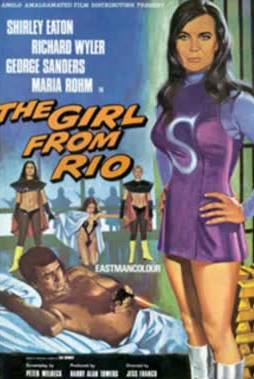 Jess Franco is one of the most prolific exploitation filmmakers – almost two hundred directorial credits and counting - and a truly international filmmaker, with co-productions set up all around the world. The Girl From Rio is one of eight films that Franco made for a 1969 release – during a week’s break in the production, he shot a third of 99 Women, without the star. The Girl From Rio is West German/ Spanish/ American financed and was shot cheaply in Brazil. It is a spy adventure laced with sci-fi and Franco’s trademark eroticism.

Secret agent Jeff Sutton (Richard Wyler) arrives in Rio and is immediately in over his head as he stumbles across a battle between carnival-masked gangsters lead by Sir Masius (George Sanders) and an army of women lead by Sumuru (Shirley Eaton, who previously played this super-villain in 1967’s The Million Eyes of Sumuru). Sutton’s contact, Lesley (Maria Rohm) disappears and Sutton is promptly kidnapped by Sumuru’s henchwomen and tortured.


The Girl From Rio exudes economics. It is a film that is all about retaining a low budget yet attracting a wide audience by appealing to their lowest desires. It is sexually explicit by 1969 standards with lesbianism and bisexuality. There are scenes of torture by kissing, by electric fan and by invisible rays and sound effects stand in for any kind of special effects. The women are trussed up in cheap costumes that are sci-fi/ Gothic/ S&M/ superhero/ silly but always revealing. It was filmed in Brazil because Brazil was cheap and, as Harry Alan Towers admits in the DVD extras, had no union problems. The fighting sequences are all entirely unbelievable and the film frequently uses the same shots more than once.

One can usually spot these kinds of films a mile away – usually they feature a faded star from Hollywood’s golden age and an ex-Bond girl. Here, George Sanders is very much slumming it, and his performance is a mix of resigned humour and boredom. Though how can anyone enliven an exchange like: Sanders: “What happened to your clothes?” Girl: “I lost them.” Sanders looks down and frowns, Franco capturing a moment in which the truth of a real reaction breaks through the performance – probably the only moment of reality in the film. Meanwhile, Shirley Eaton (best known for being painted to death in Goldfinger) plays it straight as a radical feminist who nevertheless makes her female soldiers dress up in skimpy uniforms and, as the finale reveals, clearly does not bother to train them in combat. Richard Wyler does a sub-par Bond impression, wandering through a non-plot with a bemused eyebrow cocked, a plan that seems to involve getting captured and tortured and an apparent harem of women. He also seems to have a problem with punching bad guys, often swinging his fists about a foot away from them – it may have something to do with his manicures, which he goes on about a few times. Maria Rohm gets undressed because Eaton won’t – one lesbian scene makes use of a body double, unbeknownst to Eaton herself at the time. She is still quite unhappy about it in the interview that accompanies the DVD.

Jess Franco’s films have never been plot-driven and many of them are near incomprehensible. Some consider Franco to be an artist and others prefer to think of him as a hack. Some believe that he makes poetic films within an exploitation context and if we could only see them as they were originally intended, instead of the nudity-packed studio edits and terrible English dubbing, we would all see their worth. There was even a claim that Franco’s films were not made to be seen individually and that a four-movie late night marathon is the only way to get into the frame of mind to appreciate them best.

The Girl From Rio has a wandering pace and a lot of supposedly ruminative camerawork – the kind that moves from a tight close-up of one object to another for no apparent reason. The opening scene sort of recalls something from Fellini’s mid-to-late work. To be fair, the film does often feel like it could be the stuff of, admittedly dated, art cinema if it wasn’t so seedy – for your sanity, it would be better to ignore the fact that the prison is reminiscent of the “Year Zero Theatre” in Godard’s political classic La Chinoise, a scene which also features female nudity. The difference is that Godard’s frame of reference is Mao’s Little Red Book, Dostoevsky’s Demons and the writings of Bertolt Brecht while Franco’s is probably films like Hammer’s She and Slave Girls, both cheap but also much more competently made. Also, while Godard engages with an audience that likes to use it’s brain, Franco seems to aim The Girl From Rio at people who like films with their drugs.

See also:
The Commander
From Beyond

Posted by Matthew McKernan at 14:04