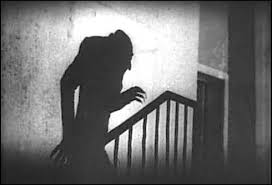 Along with The Cabinet of Dr. Caligari, F.W. Murnau’s Nosferatu: A Symphony of Horror is probably the most famous silent horror film ever made. Many of its images are recognisable – Count Orlok’s (Max Schreck – an iconic performance if a little stiff) hunched shadow against a wall, or the shadow of his hand clutching Ellen’s (Greta Schröder – very good, turning in a powerfully subtle performance in a film full of theatrical actors) heart or his rigidly straight rise from a coffin. These are key images of German Expressionist cinema, a form of cinema in love with shadows and strange sets and make-up. They create a fantasy world that bleeds into the reality of our own world, just as the film’s references to a plague would have recalled the mass deaths during the Spanish flu epidemic of 1918-20. Nosferatu is, hence, in many ways a film of moments, but does it hold up as a whole?

Freely adapted (or in other words, ripped-off) by Henrik Galeen, who also scripted Paul Wegener’s 1915 version of Der Golem (now considered lost and to which the much better known 1920 version was, apparently, a prequel – originally called The Golem: How He Came into the World) and Waxworks, from the Bram Stoker novel ‘Dracula’, Nosferatu has become one of the most famous versions of the vampire story. Hutter (Gustav von Wangenheim) is tasked by his villainous boss Knock (an overeager Alexander Granach) to travel to Count Orlok’s castle deep in the Carpathians in order to assist in the purchase of a house in the village. Ellen, Hutter’s wife, is wary of the journey and is proven right – Count Orlok’s arrival brings a plague upon the village.

As part of the BFI Gothic season, Nosferatu has been released through the Eureka ‘Masters of Cinema’ series and, thanks to a restoration, the film is looking better than I have ever seen it look before. Crisp and clear, it is now a lot easier to appreciate Murnau’s visuals. However, this version is also the most complete version of the film and, sadly, makes some of the pacing flaws all the more evident. The action is frequently interspersed with the post-facto writings of Hutter’s friend Harding (Georg H. Schnell), which are initially fascinating. The film is forebodingly framed as the story of the mass death in Wisbourg, which makes more explicit the references to the Spanish flu – as Werner Herzog would do in his remake. However, the film’s pace is frequently disrupted by long passages of text from Harding’s journal, which are rarely necessary from a storytelling perspective and merely assist in holding things up. It is difficult to imagine that Nosferatu is the work of the same Murnau who tried so often to make films entirely without intertitles – their use in The Last Laugh and Sunrise: A Song of Two Humans is very limited. As a result, there is little momentum to the film and it is easy to see it as simply a series of brilliantly done moments – all camera effects – than as an effective whole.

There seems to be a sexual subtext to the film, which is there if you want it to be. Ellen seems to be sexually frustrated – wandering around their house in a deep funk. After Hutter gets her some flowers, possibly as a sexual substitute, she can only moan, “Why did you kill those beautiful things?” Hutter is only too eager to leave her and go away on a long journey, as if he has been waiting for any excuse to escape from the house. Early in the film, he is stopped from running on the street and told that “no-one can escape their destiny” – possibly suggesting that he has yet to consummate his marriage. In the Hutter household, the bedroom seems very central. Scenes are often set either inside the bedroom or in the next room with the bed visible through a door. Hutter is played by von Wangenheim as a child, hiding under his covers when Nosferatu first attacks and showing his disdain for a superstitious book by throwing it on the floor rather than just putting it away. Everything he does is a performance – he can’t even get up in the morning without a big theatrical stretch. As if compensating for some unease, he is pretending to be happy and carefree. Count Orlok may represent to Hutter a kind of maturity or sexuality that he is deeply afraid of. An attack on Hutter, which Ellen, through some kind of clairvoyance, is able to see, plays out with both Hutter and Ellen in bed. Later, Count Orlok is seen at a window, staring into the Hutters’ bedroom. Ellen forces Hutter to look out of the window, to face his fears but instead he collapses on the bed in tears, the performance breaking down. With her ineffectual man asleep on a chair (not in bed with her), Ellen decides to fight the monster herself – she finds an excuse to make Hutter leave and then invites Orlok into her bedroom. Hutter leaves to get the doctor and, for no apparent reason, is away all night, allowing Orlok to spend the entire night with his wife. Ellen, hence, dies as a direct result of Hutter’s inability to grow up. Though not entirely convincing, the above certainly does make sense of some of Nosferatu’s odder moments – especially Gustav von Wangenheim’s performance, Ellen’s melancholy and the fact that no-one else seems to be aware of Count Orlok’s presence in Wisbourg – apart from Knock, a raving lunatic.

Nosferatu is hardly flawless, but it remains a seminal moment in cinema history. Though the restoration reveals some bad pacing (and a bombastic horror movie score that destroys a lot of the film’s more subtle, eerie moments) and misjudged interruptions, it is nevertheless a great way to watch the film. Somewhat primitive, even by the standards of other silents, Nosferatu is essential viewing for anyone interested in cinema.

Posted by Matthew McKernan at 15:30