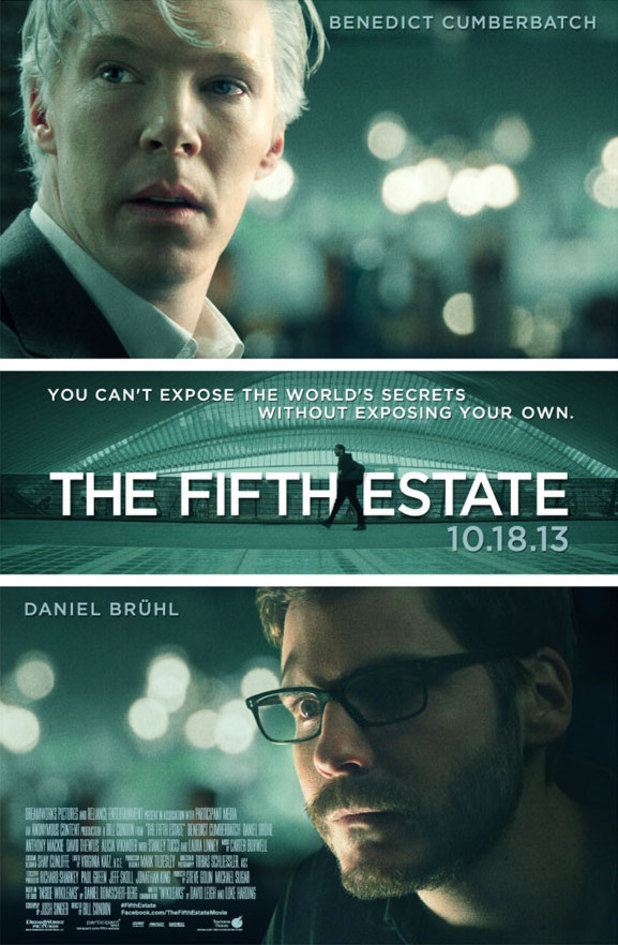 Following the final two Twilight films with a topical, controversial and political film about WikiLeaks – the first fiction feature about Assange and his whistleblower website – should seem odd. However, anyone who can make anything halfway conventional out of the downright bizarre final instalment of the “Twilight” books is a safe pair of hands, and Bill Condon’s treatment of the WikiLeaks story seems, therefore, to be more a story of resistance, grey-area ethics and mutual recrimination than anything particularly polemical or rebellious – though it may work as an introduction for anyone who prefers their head in the sand.

In Berlin in 2007, Julian Assange (Benedict Cumberbatch), the founder of a small website that offers to publish whistleblower information with full anonymity for the whistleblower, meets Daniel Domscheit-Berg (Daniel Brühl) and is almost immediately taken by him. They dedicate themselves to making WikiLeaks the infamous and influential website that it would become. However, from the start, Domscheit-Berg is kept disconcertingly out of the loop. Meanwhile, Assange is moving further and further into uncharted territory, putting them both in danger.

The film is based partly on the book, “Inside WikiLeaks: My Time with Julian Assange at the World’s Most Dangerous Website” by Domscheit-Berg himself. This, and the reticence of Assange himself, makes the film feel one-sided with a hint of character assassination. The air of mystery that the film shrouds around Assange hinders Cumberbatch’s performance – his unknowability and unclear motivations leads to a vague central performance. Assange is ultimately a figure both heroic and villainous and a film made with such a Hollywood framework is unable to find any middle ground. It ends up with two extremes – where one grateful woman tells Assange that if he had been around during the Cold War the Berlin Wall would have fallen much sooner while we also see him as working primarily for himself. The film ends sharply on the latter point, with a line intentionally comic, but also, in a way, dismissive.

There are a lot of flashbacks and backstory given concerning Assange, which, given that the film will ultimately throw up its hands in seeming exasperation at the truth of Assange’s character, are rather unnecessary. They do not reveal much in particular, leaving a conventional tale about two friends with big ideas falling out – not unlike, say, The Social Network, another film with a lot of people looking at laptop screens though a lot less awkwardly. Condon seems to have attempted to pre-empt such criticisms with a series of flashy cuts and a dreamscape of The Crowd-style computers, each an alias for Assange, all utilised in an effort to explain hacking in what feel like simple terms. Otherwise, the film feels a little too tightly structured, with the complicated real world story twisted into a three-act structure, aided and abetted with lines like, “If you are going to put yourself on a cross, you should first find out what it is made of.” All of this distracts from the real meat of the story, the central issue that anything about WikiLeaks must address.

The central issue, and one that the film takes a long time getting to, is whether or not Assange should have released Bradley Manning’s leaked files with redactions in order to protect certain people from reprisals. Fairly conventionally, the film opts for an easy answer – Yes – with little debate, offering only ethics as the determining factor. This despite clearly showing the importance of full disclosure elsewhere, when revealing the vicious murder of civilians in Baghdad and subsequent cover-up perpetrated by US forces. Although The Fifth Estate does not choose the wrong answer to the above question, it does nevertheless offer simplistic, fairly conservative ones. It seemingly suggests that WikiLeaks’ exposures are justified as long as they are not too damaging to the US, that anything diplomatically survivable is fair game but anything too horrendous is best left under wraps. In typical Hollywood fashion, a complex question is represented with a definitive answer, a happy ending of justice done and full closure – if not full disclosure.

Having said that, The Fifth Estate remains somewhat nice to see, a further American film showing real world dissent – Batmanglij’s The East  is another recent example. Though neither are fully committed to anything too radical or risky and both opts for easy cop-outs, they are nevertheless films that recognise a prevalent villainy within the American establishment. The Fifth Estate is ultimately too safe, too apologetic – the sympathetically drawn State Department official Sarah Shaw’s (Laura Linney) point that “if you don’t want dirty pictures, don’t have dirty wars” is remarkably feeble since it suggests that the USA is justified in causing as much ‘collateral’ damage as it wants and, worse still, that the dirty war was somehow ‘wanted.’ Nevertheless, a wide audience for a film like The Fifth Estate may be a good thing, especially if it enrages and leads to further reading. As likely as this may or may not be, the fact remains that, The Fifth Estate is just not angry enough.