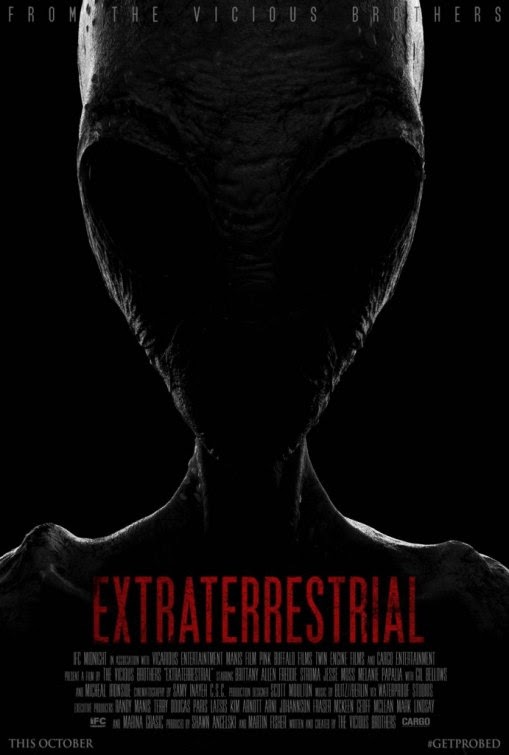 Extraterrestrial is a horror film with a mission. Filmmakers The Vicious Brothers (actually named Colin Minihan and Stuart Ortiz) have a checklist of alien invasion and slasher film clichés and they want to tick off every single one.

The characters are not developed beyond The Final Girl (Brittany Allen), The Bland Semi-Capable Boyfriend (Freddie Stroma), The Dumb Blonde (Anja Savcic), The Promiscuous One (Melanie Papalia) and The Obnoxious Sex-Crazed One (Jesse Moss). They visit a Cabin In The Woods, have no signal on their phones and when a tree collapses across The Only Road Into Town, there is no way out. And when the aliens crash land nearby, the film runs through the same deadeningly familiar slasher film routine. A ridiculous extended cameo from Michael Ironside stinks of desperation rather than inspiration.

The one surprise that this film has to offer is that, for a low-budget horror quickie, it looks rather good. The lighting and camerawork are decent and the CGI is used sparingly, though the filmmakers repeatedly lurch into found-footage during the big special effects scenes for reasons presumably financial.

The actors try to do more than the poor and uninterested script will allow, but it is a lost cause. The script makes you hate The Obnoxious One after only one line and leaves it at that, but worst off is Anja Savcic, who is given fewer lines than an alien hand has fingers before being relegated entirely to the background. The sole bit of drama in the film is a rushed scene in which The Final Girl illogically tries to get out of a marriage proposal by claiming that we are alone in the universe. The aliens quickly show up to belie that notion and any pretence at making the characters seem like actual people ends there. The Vicious Brothers are more interested in being, well, vicious but then the film is restrained by a box office friendly 15 certificate. The only scene that could be considered vicious is one with an anal probe, which tries to make that peculiar alien obsession appear frightening rather than just wholly stupid.

The film ends with an extended tracking shot that is nasty, cynical and pranky, an amusing close scored to Elton John’s version of ‘Spirit in the Sky’ that cries out for a better film to precede it. The rest of the film is insistently unoriginal, tonally erratic and just not much fun.

Posted by Matthew McKernan at 16:47