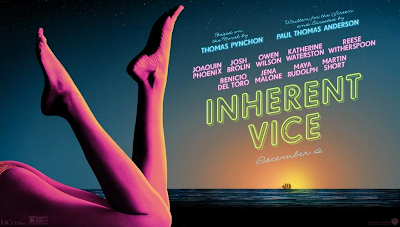 It is difficult to briefly scan over my review for The Master, first, having since written an article on Party Girl and the more negative effects of the auteur theory on film culture and, second, having since seen Inherent Vice. My review for The Master equates that film’s qualities almost entirely with those of its director, Paul Thomas Anderson, while my article on the auteur theory suggests that the director should not be the only reason we watch and/ or praise a film. This contradiction leads me to my present difficulty reviewing Inherent Vice – the film itself isn’t any good and yet many of its flaws would seem to be entirely down to its director. It leaves me with little room to manoeuvre – between trying not to focus too much on the director and their previous work and blaming Anderson almost entirely because of the lack of control displayed here. Some films, it seems, are more easily addressed via an oeuvre than others, which could be why Party Girl gets more acclaim for the qualities of its director than for the qualities of the film itself. Maybe one can only properly consider the works of a filmmaker when that filmmaker has made his last film or, worse, has stopped experimenting.

Leaving that conundrum aside (I’m sure it wasn’t a particularly interesting one) and moving on to Inherent Vice – first, I would like to say without condescension that I feel it is a good thing for a filmmaker to be experimenting with new ways of making films. Who wants a Paul Thomas Anderson film as bored and safe as Magic in the Moonlight? An experiment that doesn’t pay off will not be as rewarding, but surely it will be different enough to inspire some kind of thought or reaction. In theory, it should as long as the experimentation is due to something more than just mere style.

Inherent Vice is two-and-a-half hours and I felt left out within the first ten minutes. The film is a mess and it seems that this may have been intentional. The film is intentionally vague. The plot is intentionally incomprehensible. A lot of the dialogue is intentionally inaudible. The characters are mostly unlikeable and fairly one-note. The film’s themes are not particularly profound and are not addressed with any depth. The film, then, is pointless and seemingly proud of it. The apparent intention of the film is to be a mood piece that wanders and rambles, mourns the 1970s and introduces you to interesting, colourful people and waxes lyrically and beautifully to some nice vintage music. None of this is particularly off-putting – indeed the brilliant The Long Goodbye manages it, as does the OK The Big Lebowski, the repetition of whose cult following seems to be this film’s raison d’etre. But Inherent Vice does not succeed here in any shape or form. The characters are not interesting; the settings are not particularly memorable. The film isn’t sad or funny, but bland. It is a mood piece that doesn’t create any moods. It tries too hard to be unique and forgets to allow its audience to be emotionally or intellectually invested. It is too pretentious to be likable and too stupid, too shallow to be thought provoking.

And that is really it. As I said, the film is two-and-a-half hours and it does nothing with its running time. There have been a few critics who have tried to make claims that the film’s flaws and cock-ups are actually qualities – the one of the silliest is Jonathan Romney’s attempt (in last month’s Sight and Sound) to praise the film’s use of the human voice is an instrument for music rather than communication, as well as his attempt to address the film’s apparent influence from 1960s Playboy magazines. There have also been many who find the film’s world dense and fascinating and exciting and its tone moving but, and I need to be personal here, I don’t agree. There is nothing immersive about Inherent Vice; I did not see enough of interest in the characters and the set pieces to keep boredom at bay.

Paul Thomas Anderson, his crew and his cast have produced something unfocussed and lazy and there is nothing in it to fool those looking for art in it. And that’s it. This review may be as incoherent or as badly thought-out as Inherent Vice, but at least it does have a point.

Posted by Matthew McKernan at 21:20