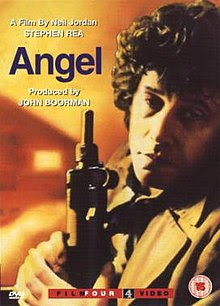 Angel was Neil Jordan’s (The Company of Wolves, The Crying Game, Michael Collins, The Butcher Boy, Breakfast on Pluto and Ondine) directorial debut, made in 1982, and it stars regular Stephen Rea (all of the above, as well as Trojan Eddie, The Last of the High Kings, A Further Gesture, This Is My Father, I Could Read The Sky, On The Edge, Evelyn, Bloom, The Halo Effect, Tara Road, Kisses, Nothing Personal (2009) and Stella Days). Though Angel is set in Northern Ireland during the Troubles, the film is a much more abstract examination of the evils of violence. The film also has, in slight roles, Donal McCann (Poitín, Cal, Budawanny, The Dead, December Bride and The Nephew) and the ubiquitous Gerard McSorley (Taffin, In The Name of the Father, Words Upon The Window Pane, Widows' Peak, Moondance, Nothing Personal (1995), Michael Collins, Some Mother's Son, The Butcher Boy, The Boxer, Dancing At Lughnasa, Agnes Browne, Angela's Ashes, Ordinary Decent Criminal, On The Edge, Bloody Sunday, Dead Bodies, Veronica Guerin, The Halo Effect, Omagh, Inside I'm Dancing, Middletown, The Front Line, Trapped, Mr Crocodile in the Cupboard, Wide Open Spaces, Swansong: Story of Occi Byrne).

Stephen Rea plays Danny, a saxophone player in a band that tours around the country. After one performance, three balaclava-wearing gangsters kill his manager and a girl that he was seeing while Danny watches helplessly on. Danny decides to swap the saxophone for a machine gun and goes out in search of vengeance.

Angel appears to be a straight-forward action thriller/vigilante yarn, albeit one with a limited budget, not unlike Jordan’s more recent, thoroughly ghastly The Brave One, but it soon becomes something much more abstract, and much more pretentious. At one point, a rather pointless conversation turns towards a poster of an Antonioni film, Jordan’s apparent influence. Indeed, the film is very distanced and has at least a vague focus on the surrounding landscape, though it seems more of a style choice than a thematic one. There are quite a few quotations as well, as if the film need only quote the works of famous writers in order to be as artistic or as profound. The film is also horridly vague and wandering, again as if an exercise in Antonioni-like near-plotless rambling is the only way to achieve artistic merit. Angel ultimately ends up being as superficial and meaningless as any similarly themed exploitation fodder. And that’s before one engages with what the film is attempting to talk about.

Angel is about the evils of violence and the senselessness of violent action and of the damage it wrecks on the mind of the perpetrator, as Danny does ultimately come to appear at the very least unhinged. Pointed as it was presumably meant to be, it is hopelessly lost, not least in the film’s slipshod denouement in which the bad guy is speedily revealed and then disposed off by a cop who does not seem troubled by his own act of violence. The film seems to suggest that some violence is justifiable and will not destroy one’s mind, though it is hopelessly vague about how one determines the difference between good and bad violence. Again, it is the police and the state that seem to have the monopoly on morality and ethics – a conclusion that looks forward to Neil Jordan’s equally superficial and almost fascist The Brave One. The setting then becomes a problem with the film’s conclusion about violence ringing false in terms of the conflict in Northern Ireland, the specifics of which the film makes great efforts to avoid. The violence perpetrated by the state is unequivocally just and any corruption and evil are individual problems that can be easily dealt with, rather than institutional problems that are more complicated than anything this film dares deal with.

The main problem with Angel, however, is not that it does not work as the art film that it so desperately wants to be, but more that its aspirations to great art thwart any other enjoyment that could be gained from the film. The plot is not exciting and the performance are too withdrawn, the actors merely goes through the motions and allowing the humanity to be staged and choreographed out of them. Ultimately, the film is full of narrative hiccups (the sequence with the woman who cuts his hair) and it is too deliberate and pre-meditated to be surprising in any way. The problem is not that the film has absolutely nothing to say that is worth hearing, it is that it can’t work on any other level beyond aborted art film.

Angel is ultimately a messy film that trips itself up on its way towards for complexity and artistry. More like the work of Tomas Alfredson than that of Michelangelo Antonioni, it is a film that is too pretentious to be merely sufficient as a guilty genre pleasure and too superficial to be intellectually engaging. It ought to please no one and irritate many.

Posted by Matthew McKernan at 16:24