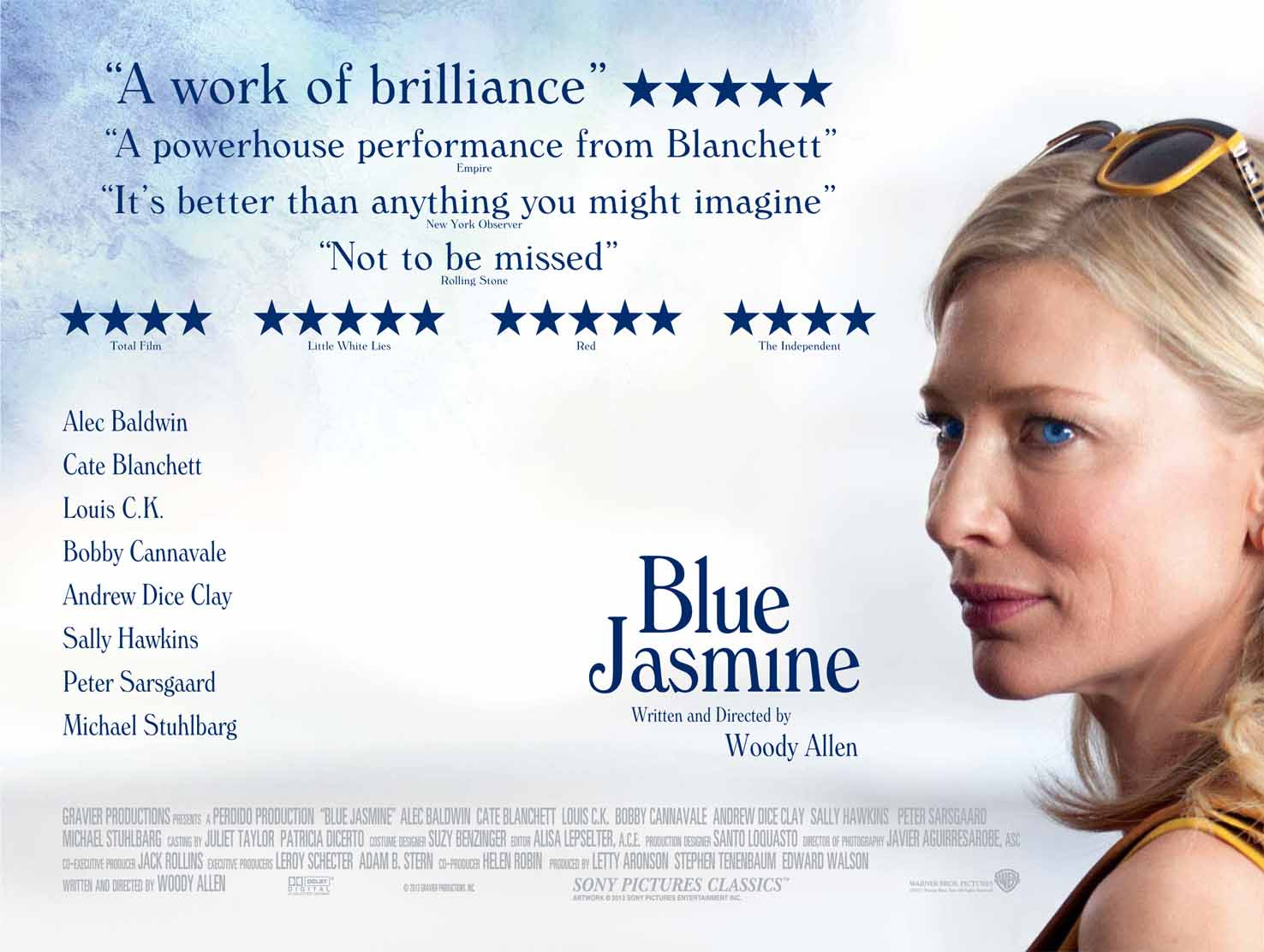 Blue Jasmine is Woody Allen’s 45th feature film and arguably his first to deal with the contemporary world in any real way. It is also his best-reviewed film in quite a while with most of the praise going to Cate Blanchett’s lead performance.

Jasmine (Cate Blanchett) is down on her luck. Once rich and married to successful businessman Hal (Alec Baldwin), she lived a full and vacuous life as one of the 1% in New York’s affluent Park Avenue. Following Hal’s arrest for all sorts of business fraud, Jasmine is left alone and broke. After a nervous breakdown, she moves to San Francisco to live with her sister Ginger (Sally Hawkins), who she has had little to do with since childhood. The film follows her as she tries to get used to working for a meagre living and as she tries get again to snare a rich husband. Meanwhile, she constantly berates her sister for her lack of ambition and choice in men – taking a particular dislike to Ginger’s fiancé Chili (Bobby Cannavale).

As is evident, Allen is in a sombre mood, making a serious film for the first time since the grim but interesting 2010 film You Will Meet A Tall Dark Stranger. The film begins with Jasmine at a very low point in her life and only briefly lightens up along the way, the drama heightened by frequent, well-integrated flashbacks of Jasmine’s time with Hal. These flashbacks are always introduced seamlessly into the narrative and frequently comment on the action, Allen’s movement between these modes displaying again his editorial skills as both a writer and director. The film unfolds well, saving certain backstory revelations until they can have their strongest, or cruellest, effect – particularly when it reveals what happened Hal after his arrest and why Ginger and her ex-husband Augie (Andrew Dice Clay) detest him so much. As is often the case, Allen shows himself to be a fantastic storyteller, very much aware of when to come in and out of a scene and displaying a deft hand at exposition, nuance, character and music. The use of “Blue Moon” as a symbol of Jasmine’s traumatic disconnect from a highly romanticised past is perfect and, in the final scene, simply but powerfully moving. Jasmine is not a nice character but Blanchett’s incisive performance and Allen’s equally insightful script make her human and thoroughly understandable.

The film’s main problem lies in its contemporary relevance. Allen has thus far largely avoided making points on current affairs, making films that, at their best, feel effortlessly timeless. A film like Shadows and Fog is able to reach a large degree of theological and philosophical depth precisely because it has no contemporary relevance whatsoever and oftentimes Allen’s best films work in a similar vacuum. Similarly Blue Jasmine is thwarted slightly by a representation of the working class San Franciscans that is all beer, vests and sports on TV and not much of a stretch from Danny Aiello’s detestable, abusive Monk in The Purple Rose of Cairo. But while Monk was a character from the 1930s, Augie and Chili merely feel anachronistically like characters from the same decade. Allen has made a career of mocking the characteristics and peccadilloes of privileged pseudo-intellectual New Yorkers and it is admirable that he is trying to show the 99% for once. It is just a pity that he does not invest these characters with any depth. Augie and Chili too often feel like caricatures (something Allen often opts for too easily) and when they do not, it is easy to suspect that this is thanks more to Andrew Dice Clay and Bobby Cannavale than to Woody Allen. Here, like Jasmine, Allen might have found himself in a world he does not understand.

Though itself tainted by Jasmine’s snobbery, Blue Jasmine is nonetheless a well-made drama with uniformly good performances and a further example of Allen’s talent for writing quick and believable scripts and directing complex and interesting dramas.


See also:
Midnight in Paris
To Rome With Love

Posted by Matthew McKernan at 21:57