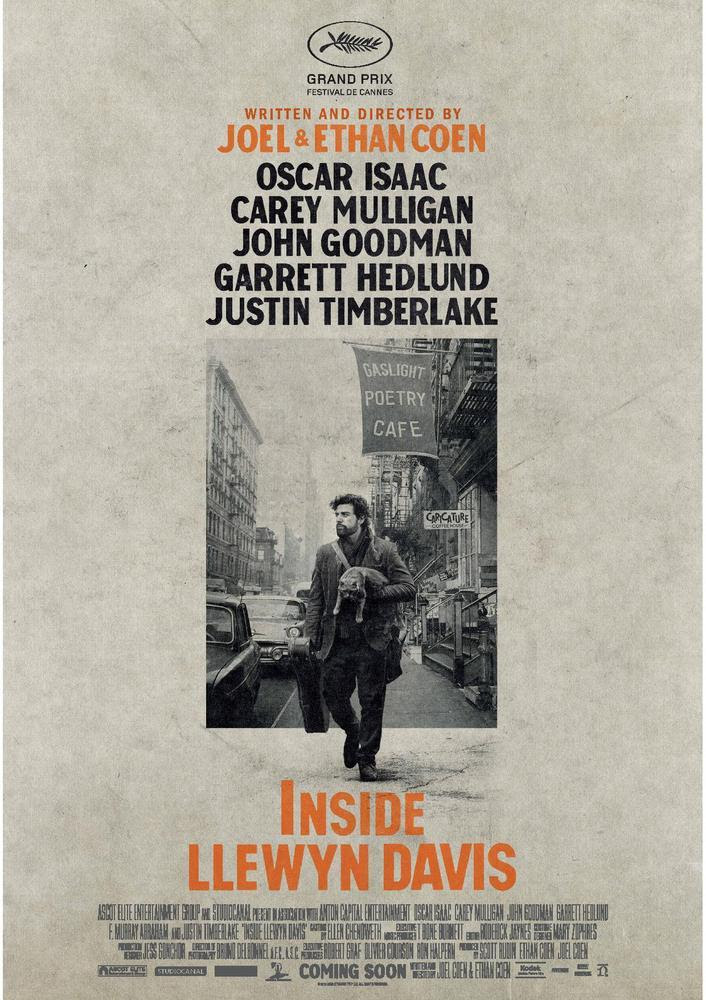 Inside Llewyn Davis feels like a step in a different direction for the Coen Brothers, it being probably their bleakest and most realistic character study to date. A story primarily about the outsider artist, in which an artist fails to make it big because of his refusal to tailor his art to the masses, it is an uneasy blend of clinical study and warm observation.

Not entirely unlike Blue Jasmine, Inside Llewyn Davis works as a drama of slow revelations. The film is easier to like as it plays out, as we slowly pick up scraps of information about Llewyn’s personality and past. He (Oscar Isaac) is a bit of a mess, bumming around 1961 New York, sleeping on a variety of couches and regularly making an ass out of himself. However, he performs beautifully, playing mournful folk songs solo in the only small venue that will take him. He is desperate to make it big but only on his own terms. Along the way, we met a series of characters he has wronged in some way or another: his ex-girlfriend Jean (Carey Mulligan) and her current boyfriend Jim (Justin Timberlake), the inexplicably supportive Gorfeins (Ethan Phillips and Robin Bartlett). We also learn more about Llewyn himself.

Initially, it is difficult to know what to think of Inside Llewyn Davis, which moves rather haphazardly between strange moments typical of the Coens and other scenes that lurch uncomfortably between shrill and quiet, all focussing on characters we don’t yet feel inclined to care about. A lot is said but little happens and less is revealed. We are left without any context, forced to take the little that we see at face value. Llewyn Davis is a blank slate, though we can figure out that he’s not a nicest man in the world. Carey Mulligan overplays hatred and is stuck with quite a lot of tin-eared dialogue – in fact, much of the dialogue is surprisingly off-key. The film is aiming for some kind of low-key, bleak drama but it appears overblown and wandering. There are a few scenes that try to be funny but they fail, with or without one’s goodwill. It begins to look as if the Coens’ may have really dropped the ball on this one. Then, finally, the film hits a balance between the oddball comedy and the grim drama and the characters become less annoying, more understandable. Nonetheless, the rest of the film plays like a tug of war between the Coens’ previous work and a new, more humane direction.

The Coens’ have made a career out of over-the-top films, usually more comic than dramatic. Many of their best films manage to be serious and darkly funny (Barton Fink, Fargo and No Country For Old Men) while others veer into sheer whimsy, sometimes successfully (Raising Arizona and The Big Lebowski), sometimes disastrously (The Hudsucker Proxy and the two films from that mid-career slump most fans try to forget about – Intolerable Cruelty and The Ladykillers). Following True Grit, which aimed for drama but collapsed into whimsy, Inside Llewyn Davis is another strange mixture but one that is much closer to a clean break. As grim and serious as Inside Llewyn Davis is, it remains stuck with some bizarre moments that do little other than slow the film down, making it less relatable. The film is about the struggle of the artist and details how artistic integrity might hold someone back. It is ultimately a drama about disappointments and disillusionment and yet ends on a note of defiant acceptance that is somewhat heroic and moving – though only if you think about it, since the ending itself is somewhat bungled. As funny as they are, the diversions, such as John Goodman’s extended cameo, are unhelpful.

That said, there are many scenes that do work to the overall film’s advantage. There is a brilliant scene in which Llewyn plays a song as part of an audition, the music rousing us and giving us hope only to plummet us back down to earth when it is finished. There is also a very funny song ‘Please, Mr Kennedy”, written by Jim, who has clearly sold-out. Both scenes reveal a lot about Llewyn’s character and about the final point of the film – showing both his justifiable defiance against those who refer to ‘music’ as an industry and the limited options that result from such a choice. Llewyn is not a likable guy, but as an outsider and an artist, he is brave, principled and somewhat tragic. Where the film works best are the moments in which we are given an insight into this dilemma and, hence, this character.

Llewyn Davis is one of the Coen Brothers’ most realistic and human characters to date, but their showcase for him as a mixed bag. The film works best as a character study and fails as an attempt to present a version of 1961. The film wanders around introducing bizarre characters, forgetting that the real meat of the film is its protagonist and what he is going through. As funny and as moving as it sometimes is, Inside Llewyn Davis is too unfocused and ill disciplined to be truly great.

Posted by Matthew McKernan at 11:32