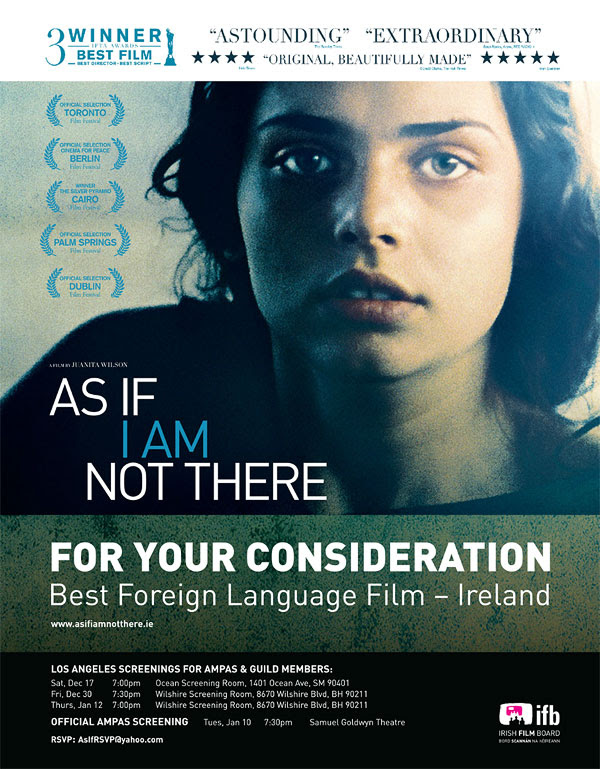 As If I Am Not There is the tough, surprisingly mature feature film debut of Juanita Wilson, which certainly suggests that she will be one to watch. Ireland’s entry for the Best Foreign Language Film Oscar, the film is a rough and uncompromising story about women forced into sexual slavery during the Bosnian War of 1992-5. The film is based on true stories told during the International Criminal Tribunal in The Hague.

Samira (a powerful central performance from Natasa Petrovic) is a schoolteacher from Sarajevo who takes a job in a small country village. Fairly quickly, the village is overrun by Serbian soldiers who shoot the men and kidnap the women. Kept initially as labourers, Samira and a few other women are taken into a hut and used as sex objects by the soldiers. The film follows Samira’s suffering and her ability to survive.

Though it is odd for an Irish filmmaker to make their feature film debut about crimes against women during the Bosnian War, based on actual testimony and on a novel by Slavenka Drakulić, As If I Am Not There almost immediately defies such doubts with its clear sense of purpose and its mature handling of truly horrific subject matter. Though the events depicted in the film are unremittingly bleak – ethnic cleansing and systematic rape – the film is powerful in its bravery, its refusal to avoid difficult truths and in the humanity of its protagonist. If you don’t know anything about the film, the course that the story takes is shocking and although most of the film’s horrible moments occur off-screen, the pain and suffering is conveyed expertly with restrained camerawork emphasising the inescapability of the situation. The war is visible only in the distance – smoke rising from a distant village and the repetitive rattle of faraway machine gun fire – and often seen through the windows of the so-called ‘women’s room’ where the majority of the film takes place. Juanita Wilson directs the rape scenes very well, emphasising their horror without unnecessary detail, focussing almost entirely on the face of the victim. Samira’s disassociation from her rape – which gives the film its title – is much more effective and respectful than a handheld camera swooping around the set trying to capture every horrible, clinical detail. As If I Am Not There is not about the violence and the horror; it is about the human victims – all women – and about their struggle to come to terms with what is happening to them. Juanita Wilson displays an incredible honesty, respect and tact in her treatment of the women’s ordeal.

Natasa Petrovic is fantastic in the central role, showing as much pain and anguish but also is much defiance and bravery as would be believable – its greatest success is that it feels wholly natural; it never feels like a performance. She is not so much a hero in the film as a traumatised woman who is able to survive. The film’s stark conclusion, showing her attempts to get used to a normal life and deal with her pregnancy by one of the soldiers, is all the more powerful since it realistically represents the consequences of such traumas without needing to tone them down for a happier ending. Juanita Wilson is too good a filmmaker to attempt to suggest that anything positive will come from these experiences – preferring instead to show the damage and the sense of life going on. If Samira is ultimately heroic it is because she copes and because she survives.

As If I Am Not There is powerful cinema and a very moving drama, but it is also a responsible retelling of real events and a respectful representation of what women went through during the Bosnian War – or any war for that matter, since the film largely avoids specifics. Juanita Wilson is sure about the purpose of the film, and it moves quickly and fearlessly into dark but important territory. It doesn’t trivialise and it doesn’t suggest that anything particularly good or positive can come out of such situations, but it is a story that needs to be told. As If I Am Not There tells it with respect and integrity.

Posted by Matthew McKernan at 12:12

Email ThisBlogThis!Share to TwitterShare to FacebookShare to Pinterest
Labels: 2010, as if i am not there, bosnia, film review, ireland, juanita wilson, matthew mckernan, natasa petrovic, slavenka drakulić, whinge