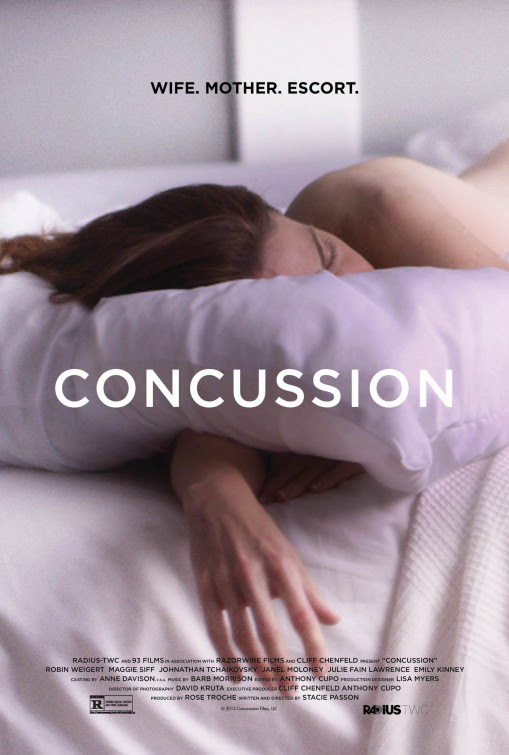 Concussion begins with a group of women talking about their appearance and the many ways by which they can improve it. After that several shots show women tiring themselves out on exercise bikes scored to ‘Oh! You Pretty Thing’ by David Bowie. The opening suggests a comedy with a real satirical edge - an angry, funny look at where feminism is today - but Concussion soon develops into a moody, muted drama about a woman, Abby (Robin Weigert), who doesn’t know what she wants.

This time, however, the suffocating family is a lesbian couple with two kids and Abby’s solution is to become a prostitute for other lonely and unsatisfied women. This is ultimately where the originality ends, since Abby still has a big, well-appointed house and materialistic friends – the lesbian element to the film being primarily incidental in the same way as 2010’s The Kids Are All Right. Writer-director Stacie Passon directs with restraint and the film’s overall tone is one of suffocation and stagnation, which fits the themes of the film well, but it has been done before. Passon is more interested with hitting the typical story beats – an awkward chance meeting with a client in a local supermarket, forgetting to pick the kids up from school – and problematically avoids addressing in any depth the complicated issues concerning prostitution in the present day.

Robin Weigert is good as Abby, though it is a fairly passive role and a necessarily underwritten one. Passon’s script puts just enough of a personal mark on certain scenes so that they don’t feel too redundant and there is a commendable attempt to make a film that is genuinely about women. It could have addressed less traditional, much more difficult issues (why is prostitution so often depicted as a way for women to escape boring domesticity and so rarely shown for what it often is?). The opening promises an angry, funny film with bite, but Concussion is happy to be just another quiet, inoffensive drama about an unfulfilled middle class woman.

Posted by Matthew McKernan at 08:53