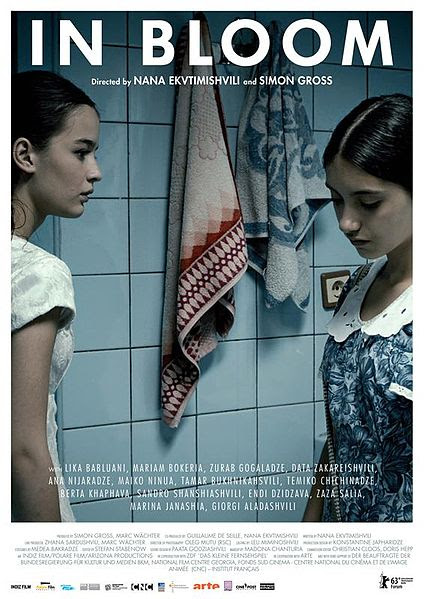 
In Bloom, directed by Nana Ekvtimishvili and Simon Gross was Georgia’s official entry for the 2013 Academy Award for Best Foreign Language Film and won Best Film at the 2013 Hong Kong International Film Festival.

It is a dark, realist tale set in 1992 about two friends, Eka (Lika Babluani) and Natia (Mariam Bokeria), trying to survive adolescence and marriage in a fiercely patriarchal society of Tbilisi, Georgia. The film is a bleak view of life in Georgia with a clear focus on the violence seething just underneath the surface of everyday life – the sudden appearance of a gun seems to shock no one. Eka and Natia do suffer, but they are completely defiant and, crucially, independent of the cruel masculine world around them. That the film’s traditional narrative ultimately plays out in an unexpected direction is both a statement of the originality of the filmmakers and the honesty of their feminist agenda.

As far as the mechanics of the plot go, it is not overly unique, but it works on the intensity of its performances and the toughness and integrity of its approach. It is beautifully shot, the handheld camera discovering and lingering on moments of aesthetic beauty as it goes, finding beauty in images of breadlines and urban decay. It is passionate, socially aware filmmaking with complex long takes capturing raw humanity more evocatively than most documentaries. It is also pleasantly optimistic where it could have been depressing.

The performances are very good, particularly non-professional young actors Babluani and Bokeria, who bring more experience, emotion and honesty in their roles than their ages (14 during filming) would suggest possible. They demand and maintain one’s attention and empathy throughout.

In the end, the film is a rich, realistic and moving story about friendship and defiance.

A longer review is available here.

Posted by Matthew McKernan at 13:13