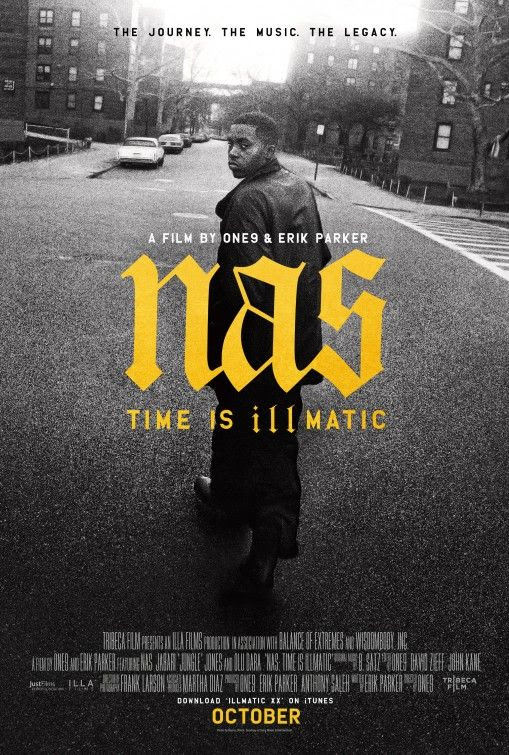 Nas: Time Is Illmatic is a documentary about Nasir Jones, better known as Nas, taking us through his early years growing up in the Queensbridge Projects in New York City leading up to 1994 and the conception, recording and release of his debut album ‘Illmatic’, one of the most acclaimed hip-hop albums ever released.

The film is a fairly standard documentary, preferring to offer quick biographies of Nas and his family intercut with talking heads and footage of Nas performing the album live in 2013. The film analyses some key tracks from the album, detailing the genesis of the lyrics and music and the truths between the lines. The film is bookended with Nas’ journey to Harvard to announce the beginning of the Nasir Jones Hip-Hop Fellowship.

Nas: Time Is Illmatic is not particularly groundbreaking in terms of form. At its worst, it resembles any cheap and quick biography with degraded footage cobbled together from publicly owned sources and released on some remote satellite channel. But for a potted history of the effects of the creation of the Projects and the GI Bill provided by Cornel West, the film often prefers to avoid context. Though it is true that writer Erik Parker and director One9 may legitimately feel that Nas’ furious but eloquent lyrics speak for themselves, it leaves tracks like ‘The World Is Yours’ and ‘One Love’ doing most of the emotional heavy lifting.

The key thing that differentiates watching the film from listening to the album are the interviews with Nas and his brother Jabari, or Jungle, which reveal the roots of the anger and disaffection that inspired Nas’ lyrics. Often filmed in the Projects themselves, the brothers eloquently and poignantly recount their troubles, the deaths and incarceration of friends and the toll that drugs took in their neighbourhood. These interviews bring across the value and truth of a record like ‘Illmatic’ with more melancholy and heart than the series of talking heads raving about the album seen earlier in the film.

Nas: Time Is Illmatic too often assumes that the viewer is aware of the socio-political causes and effects behind hip-hop and the urban African-American experience in general. It may not feel that it has to (and it probably shouldn’t have to), but the film does little of its own work. None the less, its portrait of the Projects in 2013 is as effecting as ‘Illmatic’s was in 1994.

Posted by Matthew McKernan at 16:40