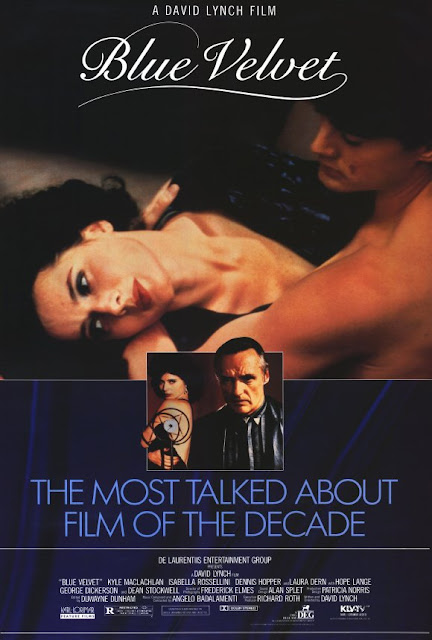 After the thorough disaster that was Dune, David Lynch needed a comeback, something distinctive and artistic to remind audiences that he was still capable of an Eraserhead or The Elephant Man. Blue Velvet is what he came up with and it is in some ways the epitome of his style of filmmaking.

A plot synopsis of Blue Velvet will always, at least initially, make the film sound like a movie for young adults. Jeffrey Beaumont (Kyle MacLachlan) is an amateur sleuth who begins investigating a mysterious woman, Dorothy Vallens (Isabella Rossellini), who may have ties to a group of violent criminals (including Frank, played by Dennis Hopper). He is assisted by Sandy Williams (Laura Dern), who is the daughter of the local police officer (George Dickerson) who has warned Jeffrey to keep out of danger.

The film initially has the feel of a cheesy 1940s film noir and it often approaches a spoof of the genre. The idyllic American suburbia, all white picket fences and waving firemen, is presented in all its wholesomeness (more on this shortly) while Jeffrey’s first meeting with Officer Williams is scripted with all the naïveté and comic frankness you’d expect from an old fashioned crime film. However, one of Lynch’s most interesting innovations here is his inclusion of discordant elements, which play with such simplistic generic markers. Famously, his camera moves deep into the Beaumont’s well-tended lawn to reveal the darkness and violence of the insects living within it. And his first exchange with Officer Williams immediately follows his gruesome discovery of a dismembered human ear, which is much too graphic and sinister for a 1940s potboiler. Or, more humorously but nonetheless equally telling of the morbid side of human nature, his grandmother tells Jeffrey to keep safe while watching a film on TV which features an armed man skulking up a dark flight of steps. Lynch frequently moves back and forth between these two modes – the mystery entertainment and the dark horror – keeping the audience constantly uneasy, unsure whether they are watching something funny or deadly serious. Far from a balancing act, Lynch wants his film to shift awkwardly, to not make sense, these stylistics being only a means to an end.

Blue Velvet is intentionally unclear, but there are certain themes that are clearly represented. Jeffrey Beaumont is an amateur sleuth, a plucky kid who naïvely gets involved in things that are too serious for him to initially comprehend. However, this is not restricted to the crime-story plot (the plot in Blue Velvet is fairly marginal anyway), but also to Jeffrey’s sexual awakening. Sandy makes this clear when she wonders if he is “a detective or a pervert.” In keeping with Lynch’s strategy of employing discordant moments, Jeffrey smiles but significantly does not reassure her about his mental state. As Jeffrey witnesses more and more sexual perversions during the course of the film, it is suggested more and more that he might actually get turned on by it. Just as he unexpectedly proves to be a rather capable detective, he also proves to be a bit of a pervert. In both senses, Blue Velvet can be read as a rite of passage story, in which Jeffrey must chose between a wholesome life with Sandy in suburbia or a perverse one with Dorothy in a dark apartment (as a side note, can each of his visits to Dorothy’s apartment be said to represent a further step in his maturation?).

The film is essentially dreamlike, following as it does the logic of dreams. While the more dreamy moments – the shots of the suburbs, “Blue Velvet” sang by either Bobby Vinton or Isabella Rossellini – are more clearly structured and recognisable, the nightmarish moments appear without warning and often have an unclear connection to the rest of the film – the sudden appearance of Frank and his attack on Dorothy, the visit to Ben (scored with its own love song but this time darkly out of place – “In Dreams” by Roy Orbison) and Jeffrey’s final visit to Dorothy’s apartment. Sandy, introduced in a style that emphasises her goodness and wholesomeness (as well as the 1940s potboilers the film is referring to), talks about having a dream in which darkness is defeated by robins and, in an idyllic ending, Jeffrey and Sandy see a triumphant robin eating one of the violent insects from Jeffrey’s lawn. It is unclear here whether Lynch ends his film on a sincere and optimistic note about the overcoming of evil by good or whether he is merely still spoofing the idealism and hope of the American Dream. Many people prefer to view Blue Velvet as a film about dark impulses, which hide behind white picket fences and carefully manicured lawns, others as a plea for good old-fashioned goodness. Where one extremity is too misanthropic if not nihilistic the other is too optimistic, leaving a gap in the film, which can only be filled by the viewer. As with the best kind of ambiguity, the interpretation that you choose reveals something about you as a person.

Apart from maybe The Elephant Man and The Straight Story, Blue Velvet is Lynch’s most accessible film and offers an interesting framework for deciphering his other work – in this way, it is also his most recognisably Lynchian film. It is a ‘difficult’ film if only in the sense of an artist pursuing his own artistic agenda, unconcerned that the majority of his viewers might misunderstand or misinterpret his work. Though it is unclear whether he is having a laugh or if he is being deadly serious – The Straight Story and Wild At Heart may or may not offer clues here – Blue Velvet is not a slapdash, meaningless film that Lynch’s critics (myself included) claim he can’t help but make, but a challenging, interesting and sinister retelling of the rite of passage story.

See also:
Scanners
From Beyond
The Commander

Posted by Matthew McKernan at 19:07