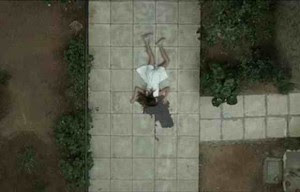 In 1997, Michael Haneke made a psycho thriller called Funny Games that exhorted the audience to leave the cinema and then told those who remained that they were responsible for the crimes onscreen. Then in 2009, Yorgos Lanthimos made Dogtooth, a film that seemed to be cashing-in on the Josef Fritzl scandal (though the script was written before the story came out) but which primarily blamed the family and the façades of bourgeois normality that we all put up. Now comes Alexandros Avranas’ Miss Violence, which deals with suicide, incest and paedophilia but without any real intellectual weight or compassion for the victims. And as always, the complacent viewer and the bourgeois lifestyle are the real villains.

On the day of her birthday, eleven year-old Angeliki (Chloe Bolota) commits suicide by wordlessly jumping out of a window during the family celebrations. The rest of the family – including the domineering Father (Themis Panou) and the silent mother Eleni (Eleni Roussinou) – claim not to know why she did this horrible thing, but as the film plays out, the horrors of this dysfunctional family are laid bare.

The film builds slowly following the suicide. We are invited into this family’s home (the film begins with a door opening and ends with a door being locked to emphasise our entry into a very private world) and we slowly notice certain incongruities and oddities. Father is strict and abusive and the film is ultimately about control and how everyone loses when someone enforces their will.

But the film is hopelessly misguided. Avranas tells the story with long, steady takes, the look of intellectual cinema, but it seems like a gesture. The film seems little more than a series of shock tactics intended only to enhance the director’s international reputation – a gambit doubly successful when one considers the film’s two top awards from the Venice Film Festival. There is no intellectual weight to match the intellectual look, only surface imitations of previous films. Characters stare out at the audience to suggest their complicity in moments straight out of Funny Games and the director’s insistence that the victim is as violent as the victimiser is a ridiculous statement badly made. Add to this the heartless, exploitative representations of abuse and we have an incredibly stupid film that is little more than an exercise in cynical cruelty.

Posted by Matthew McKernan at 12:03