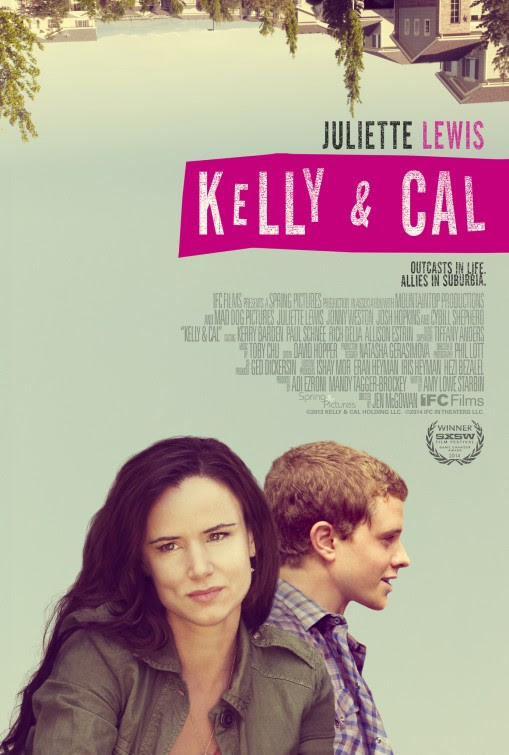 Kelly (Juliette Lewis) has just had a baby with her husband Josh (Josh Hopkins), and is now wandering around her house, trying to get used to the idea of motherhood and domesticity. She meets Cal (Jonny Weston), a teenager in a wheelchair, whose rambunctious past and trapped present mirrors her own. They strike up a relationship that will threaten everything Kelly has.

Kelly and Cal is yet another American indie film about a lost middle-class woman torn between her materialistic friends and a more anarchic past. Kelly used to be in a band – a Riot Grrrl band called Wetnap – though her mellowing is typified by an embarrassed nostalgic fondness for Bryan Adams. As it goes with films like this, she finds release in an outspoken younger man whose hatred of all compromise and tradition represents first what she has lost and then, when the film begins to re-establish the status quo for its safe ending, his dangerous immaturity. Jen McGowan and Amy Lowe Starbin, the director and writer respectively, ensure that their film about repressed non-conformity hits all of the typical beats, smugly mocking Kelly’s in-law (including Cybill Shepherd) and friends for their wholly blinkered and materialistic view of life and yet re-establish these very things for the ending in which Kelly finally embraces motherhood and domesticity. Kelly’s fears and her attempts to escape from her big house and tightly knit family are revealed as something rather selfish, rather than something truly self-fulfilling, and the film ends triumphantly (to the upbeat twangs of an indie song) with her having learnt her lesson.

The actors are all rather good, but they are never given anything to do. McGowan and Starbin prefer dramatic scenes to end with one character storming out while the other looks on, agape, shaking their head in sadness and confusion. The viewer can be forgiven for wishing that they would simply yell and scream at each other until all of those not so subtle nuances were laid clearly out in the open, instead of this series of barbed, pointed statements followed closely by a slammed door. When Cal drowns out Kelly’s complaints by playing the drums, one wants her to toss the drums out the window. Instead, she leaves.

Films such as this, presumably about repressed emotions, are much too often repressed themselves. It is a half-decent film well acted, but there doesn’t seem to be any real heart in it.

Posted by Matthew McKernan at 15:01