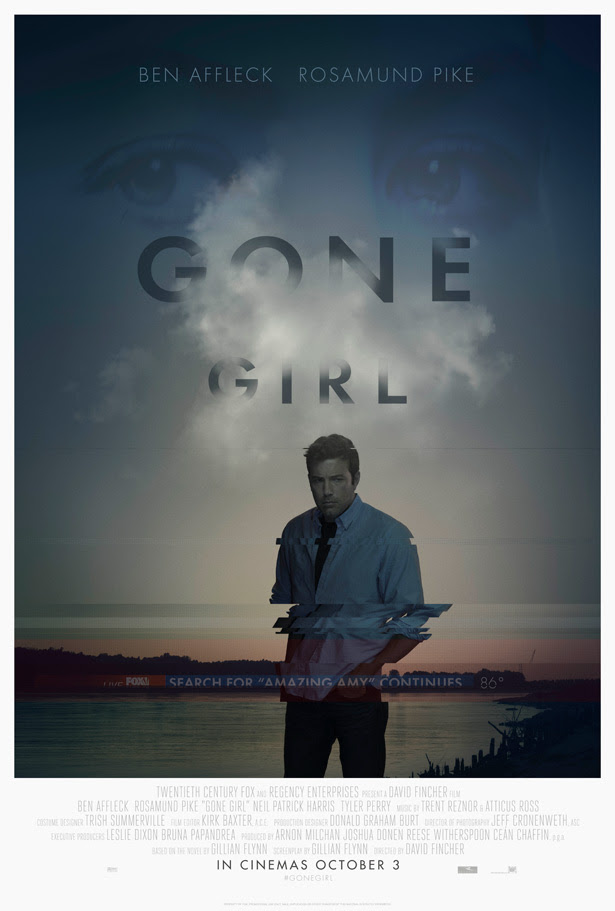 A new David Fincher film is usually followed with quite a lot of interest, usually from critics who say everything but the word ‘auteur’ – now a bad word, though the meaning remains. Fincher’s habit of making one bad film and one half-decent one continues, though this time it would be a stretch to call Gone Girl half-decent.

Gone Girl is a twisty film that is hard to write about without getting into spoilers, so I’m not going to try avoiding them, so be warned. Nick Dunne (Ben Affleck) is unhappily married to Amy (Rosamund Pike). When she disappears, the police (including Kim Dickens) begin to suspect Nick for the crime. Nick and his sister Margo (Carrie Coon) try to clear his name.

There isn’t much point in reviewing Gone Girl at all. It seems to be the kind of film that will strike a chord with some people who are willing to ignore its flaws. If one does not like the film, it is probably down to their finding these same flaws insurmountable. Therefore, I am not going to review Gone Girl. I am simply going to address five simple thoughts about why the film doesn’t work.

1. The plot is not clever. In fact, it is really rather stupid. Amy Dunne’s master plan is so over-thought and hinges on so many variables that it is pointless even trying to imagine that something like this could ever possibly happen. The film loses all credibility fairly quickly, which would be forgivable if it was at least entertaining.

2. The film is not entertaining. One reason that Fincher has managed to gain the cachet of a modern-day ‘auteur’ (primarily, it seems, from critics who want posterity to show that they were on the right track all along – no critic wants to be dismissive of the filmmaker who turns out to be the next Hitchcock) is that he is very good at making stupidity look like intellect. His films usually have a cold and intellectual feel, but they are never particularly deep. This means that a dumb script will be made to look like something out of Beckett. Gone Girl is, hence, a dumb thriller that thinks it has something profound to say, and so mutes the drama and thriller aspects to allow the audience the necessary distance to think about the film’s real meaning. However, if the film has no particular meaning (see Point 4) then it leaves the film feeling both stupid and dull. The film’s tediousness brings us to the next point.

3. It is not an excuse to say that the film’s flaws in story and pacing are down to a difficult adaptation. Fincher is usually good at picking clever scripts, scripts that do the hard work for him. The successes of The Social Network are all down to Aaron Sorkin and the cast, Fincher’s contributions are overblown party sequences and that awful boat race scene. Gone Girl’s may have had problems because the book was apparently such an unwieldy source (I haven’t read it), but it is still a film and needs to work on its own. Gone Girl may be a good adaptation – it might give a good approximation of what it is like to read the book – but that does not make it good cinema.

4. The film’s subtext is not clever or original. The film, then, is not really a mystery-thriller after all, but really an examination of how long-term relationships might develop over the years, moving from the false play-acting of the early days to the growing resentment towards the ease with which one’s other half embraces a bored domesticity. The film’s ending is an exaggerated look at the kind of couple that only stays together for the kids, faking love and happiness in public and wanting to kill each other in private. Many dramas look at this kind of thing in a way that is truthful and moving, taking a long, hard and difficult look at what it is that makes relationships tick. Gone Girl takes two and a half hours to say that unloving relationships happen.

5. The film is not feminist. There is a moment in which Amy complains about the way that women have to alter their personalities to attract men, but also keep them. This may be true, but it is difficult to believe that it is extremely common or that it doesn’t cut both ways. Are there men out there who have to falsify their personalities in order to attract women? If there aren’t, then why not? The film is happy enough making the statement and moving on. Regardless of the validity of that, the film also suggests that, once free, the woman truly in touch with who she really is will lead a lonely, seemingly asexual existence next to a pool, eating a huge packet of crisps. Rosamund Pike, in a rather one-note performance, plays Amy as a stone-cold psychopath, a manipulating, vengeful villain without an ounce of remorse. Hardly a feminist icon. Meanwhile, the other woman that Nick has a sexual relationship, Andie (Emily Ratajkowski, most famous for that ‘empowering’ “Blurred Lines” music video) is a stereotype of the neurotic, clingy airhead girlfriend. According to Amy’s argument above, Andie would really be playing this part (based on what she thinks men like) and in reality would be a much more fully rounded and independent person. The film is not interested in this question.

Gone Girl is the kind of film, like Skyfall or The Dark Knight Rises, that you could only think is clever if you ignore the stupid. It is also a film that offers a facile examination of marriage, one that the film seems to think is actually challenging and risky and that requires the cover of a dopey thriller. Almodóvar or Verhoeven it ain’t, though it is, by definition, pretentious.

Posted by Matthew McKernan at 15:39